In the early 1970s, Eden Foods was encouraging consumption of whole grains, so making them more convenient for people to eat seemed like a good idea. A working relationship was established with Schmidt Noodle Company founded in Detroit in 1923. After learning how to mill whole grain flour that made good pasta, Schmidt Noodle began making deliciously smooth whole grain organic spaghetti. Organic whole grain EDEN Pasta became available to Midwest natural food stores and co-ops beginning in 1977. In 1982, at the request of its second owner, Eden Foods bought the pasta factory and it became the Eden Organic Pasta Company (EOPC). In 1989, it earned the distinction of being North America’s first third-party certified organic food processing facility.

Dedicated people at the small factory have carried it forward by dutifully looking after handling and processing techniques that long-ago disappeared from commercial pasta making. Eden Foods refers to EOPC as a functioning museum. Visitors to EOPC still say this pasta is handmade even though there are traditional machines used. Recently, Eden has completely upgraded this 1923 factory in a manner that should serve its needs for at least another 50 years.

Each step in making EDEN Pasta helps to create fine texture and flavor, beginning with tasteful selection of organic grain. All whole grain flours are milled at Eden Foods, while semolina and patent durum flours are prepared at a certified organic mill in North Dakota. Organic vegetables and organic seasonings such as carrot, annatto, beet, spinach, and Jerusalem artichoke are added to some pastas for variety, flavor, and color.

EOPC kneads flour and water to develop a dough. For pastas like EDEN Spirals, Shells, Elbows, Alphabets, Ditalini, Gemelli, Rigatoni, and Spaghetti, the dough is pushed through vintage brass dies and then cut to length. For EDEN Ribbons, dough is rolled out and folded over itself eight times. These laminated sheets are trimmed, cut to width, and then cut to length. After shaping, the pastas are steam dried, gradually reducing their moisture content and drying it from the inside out. The pastas and flat ribbons are dried on screen trays, while the long uncut strands of spaghetti are hung on racks to dry before they are cut to length. The drying process can take from 27 to 48 hours, depending upon the cut and ambient humidity. The pastas are packaged in recycled, recyclable paperboard boxes. Each one has an Eden tested recipe on the back with a photo of it prepared. The boxes are color-coded to quickly show the percentage of whole grain.

Pasta was a very early fast food, quick and easy to make. If you have EDEN Pasta in the pantry (a variety is best), it’s a snap to make delicious, satisfying, wholesome meals in very little time. Add vegetables, a can of EDEN Beans, EDEN Spaghetti or Pizza Pasta Sauce, a drizzle of EDEN Olive Oil, and seasonings for a fabulous meal that’s ready in minutes.

EDEN Pasta has no salt added and contains no oil, eggs, or untoward additives. All are EDEN organic and Non-GMO verified. For dozens of free pasta recipes and ideas, visit edenfoods.com/recipes – or download the free EDEN Recipe App for iOS and Android. For more EOPC information, please contact Eden Foods. 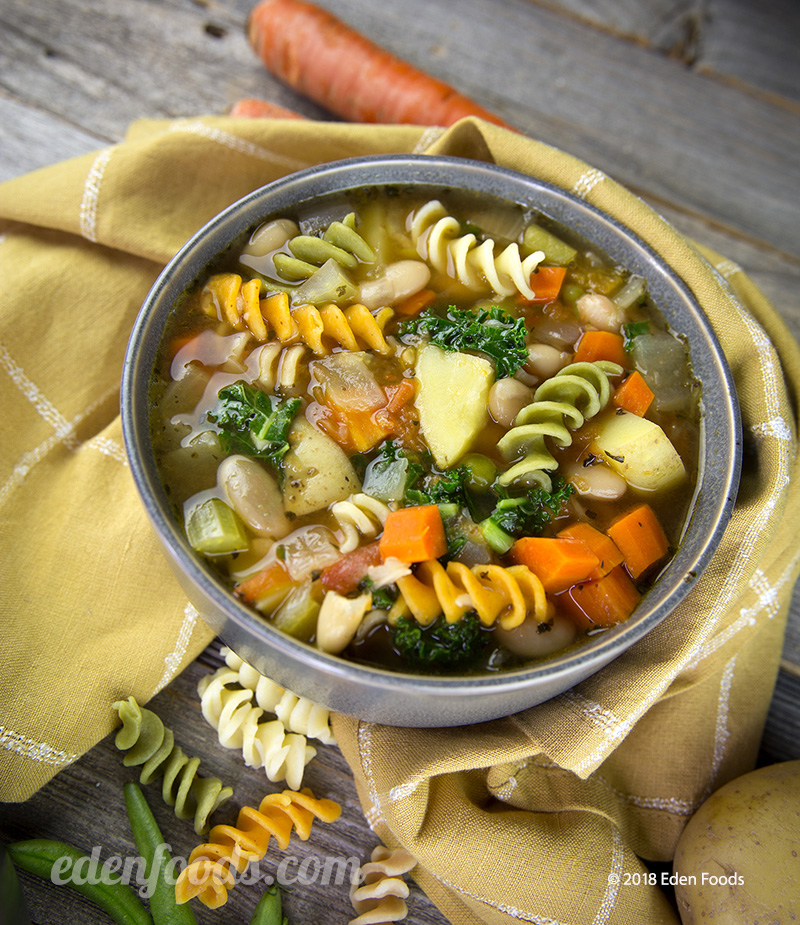