Mushrooms date back more than 300 million years when some fungi began growing bodies of a cap shape. There are more than 46,000 species of them.

Drying foraged mushrooms is one of the earliest ways people preserved food. Fresh mushrooms are generally high in moisture and do not keep long. Their short foraging seasons are limiting. Drying them provides year-round access and benefits. Properly stored in a dry, dark place, dried mushrooms keep a very long time.

Having dried mushrooms in the cupboard is quite handy for preparing meals and dishes. They are a versatile way to add savory richness and enhanced food value. Drying concentrates and intensifies their flavor so fewer mushrooms are needed, making them relatively economical. Fresh and dried mushrooms can be used together in recipes for a stronger flavor. Mushrooms are one of the rare foods that taste even better when dried. In Japan, the rich, savory flavor of dried mushrooms such as EDEN Shiitake and Maitake is referred to as umami. It is said that the umami flavor goes well with just about everything.

Dried speciality mushrooms are also very high in nutrients, especially the polysaccharide beta gluten, B vitamins, and vitamin D. Vitamin D is essential and plays a vital role in human metabolism while helping boost the immune system. When mushrooms are exposed to sunlight or ultraviolet light, they convert ergosterol, a sterol found abundantly in mushrooms, into ergocalciferol or vitamin D2. Most people get plenty of vitamin D from the sun or animal foods, but for vegetarians or those subject to limited sunlight, dried mushrooms are an important vitamin D source.

Dried mushrooms require soaking for about 20 minutes or until soft to reconstitute. Then cut and use them as if they were fresh. The soaking liquid is called ‘mushroom liquor’ and can be used in cooking. It is also stored or frozen for preparing soup stock, and can be cooked down to concentrate flavor.

Shiitake mushrooms Lentinula erodes are the second most common edible mushroom in the world after white button mushrooms. Highly valued as food and tonic in the Far East, their cultivation began 1,000 years ago. Shiitake have long been recognized as health food, a quality attributed in part to their abundant of polysaccharides, complex carbohydrates. Lentinan and lentinula erodes mycelium (LEM) are two polysaccharides in shiitake that scientists find contribute to building and maintaining a healthy immune system. They have anti-viral properties and are said to counteract the effects of excessive intake of salt and animal food.

EDEN Whole Shiitake Mushrooms are grown on oak logs in a natural forest habitat for the correct amount of sun, shade, and moisture. The first mushrooms to appear from the logs after the spores take hold are called ‘donko.’ EDEN Whole Shiitake are donko grade with thick, round, tight caps. Donko grade has the flavor that made shiitake a culinary star. They are hand picked and naturally dried to enhance their savory umami flavor.

EDEN Sliced Shiitake Mushrooms are harvested after the donko variety. Their caps are larger and less curled. They are grown and hand harvested in the same manner as donko. Stems are removed and discarded before slicing and natural drying. EDEN Sliced Shiitake are convenient and quicker to use after their shorter soak time. Add them directly to soups and stews without soaking.

In Japan, Maitake means dancing butterflies. Maitake's Latin name Grifola frondosa refers to the griffin of mythology with the head, wings, and front talons of an eagle, and body and back legs of a lion. Maitake are native to northeastern United States, Canada, China, and Japan. They primarily grow at the base of oak trees, and an occasional maple or elm. Maitake's delicate, rippled cluster structure resembles butterflies dancing. They are highly valued in Japan for their taste and healthful properties, and are affectionately called the Dancing Mushroom. Finding a maitake growing wild in the woods would cause the finder to literally dance with joy. In old Japan, maitake were readily exchanged for their weight in silver, with some mushrooms weighing 50 to 100 pounds. Maitake locations were guarded secrets, even within a family. Although maitake have been used in Japan and China for thousands of years, they have only become popular in the U.S. during the past 20 years as Western culture began discovering miatake's beneficial properties.

Americans call maitake Hen of the Woods or Cloud Mushroom, their rippled clusters reminiscent of ruffled feathers or cloud layers. Recently, researchers are calling maitake the King of Mushrooms because of prodigious bracing, strengthening, and healing qualities. Immune strengthening properties are credited to maitake's polysaccharide carbohydrates, especially beta glucan. There is evidence that maitake contributes to heart health and healthy weight management. The common button or white mushroom contain less than 1% daily value (DV) of vitamin D, while EDEN Maitake contain 50% DV of vitamin D2. They are also rich in B3 niacin.

Wild maitake are a rare find today. Most commercially available maitake are cultivated on a substrate. EDEN Maitake Mushrooms are organically grown in Pennsylvania by a family that has cultivated mushrooms since 1927. They are grown without the use of fungicides, chemicals, or preservatives. These homegrown mushrooms are exceptional. Maitake mature in about 60 days and are then air dried.

EDEN Whole and Sliced Shiitake are grown in a forest habitat on hand hewn logs. EDEN Maitake Mushrooms are grown on organic all vegetable substrate, without the use of untoward chemicals.

EDEN Shiitake and Maitake are used the same way as fresh mushrooms or other dried mushrooms in soups, stews, stir-fries, grain and pasta dishes, sauces, and casseroles. Parboil and chop for a delicious flavor addition to omelets, or on pizza. Their flavor blends well with any grain, bean, seafood, meat, poultry, or vegetable. Try combining them with fresh mushrooms, too. Combine EDEN Shiitake and Maitake for a deliciously rich marinara, creamy white sauce, or gravy. Follow package directions for soaking to reconstitute, and use the liquid as part of a recipe or reserve for soup stock. 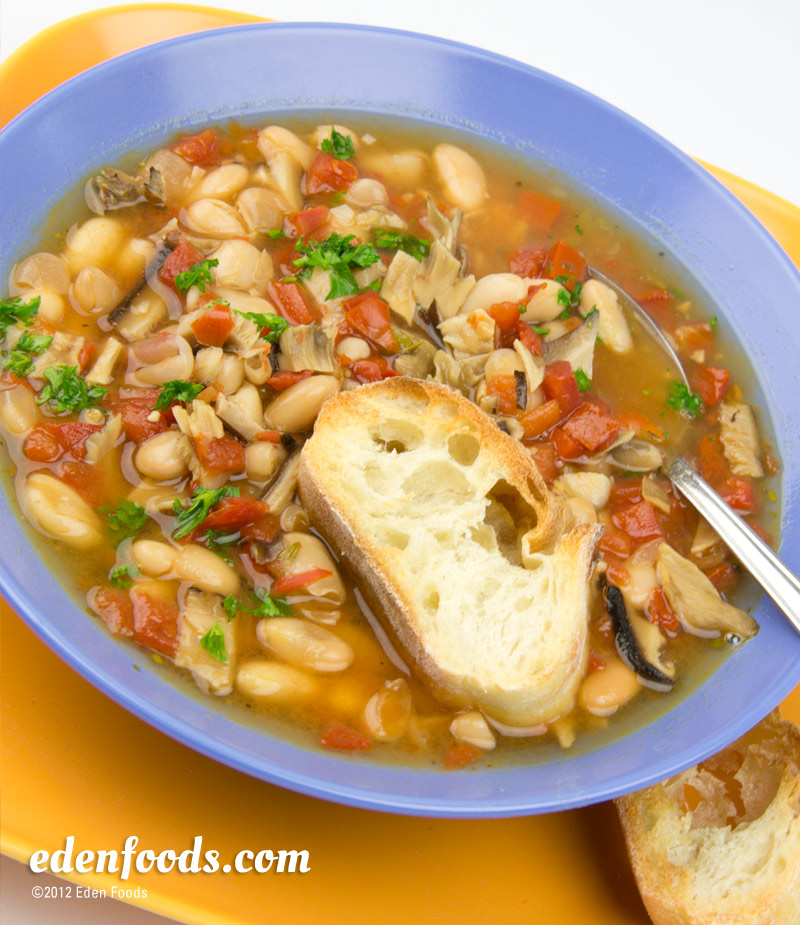