Vital Nutrients from the Sea

Archaeologists believe that Japanese cultures were eating sea vegetables before the dawn of agriculture, over 10,000 years ago. In fact all over the world throughout history people living in coastal areas have enjoyed these friendly gifts from the sea. Today, though the terms ‘seaweed’ and ‘sea vegetable’ are often used interchangeably, sea vegetable is usually used to describe seaweeds that people commonly eat. There are roughly 9,000 known types of seaweed in the world, and none have been found to be poisonous. Yet fewer than 20 of these have the honor of being called sea vegetables. Seaweeds, like land plants must have sunlight to grow, but they draw their nutrients from the surrounding water rather than pulling them from soil. As a result, sea vegetables offer concentrated nourishment at levels rarely found in land plants. They contain a whole spectrum of nutrients including calcium, iron, potassium, zinc, vitamins A, B complex, C, D, E, K, and a trace mineral profile similar to that of human blood.

Traditional healers have long known that sea vegetables can help to purify and cleanse. Modern scientific research has identified several compounds that appear to be responsible for sea vegetables' detoxifying and immune enhancing qualities. These include lignans, fucans, and polysaccharides like alginic acid, found abundantly in brown algae sea vegetables such as kombu, arame, hiziki, and wakame. In one of the most notable studies on sea vegetables to date, a team of researchers led by Dr. Yukio Tanaka at McGill University in Montréal demonstrated that alginic acid has the ability to bind with heavy metal pollutants found in human intestines, rendering them indigestible and causing them to be eliminated. Good news in a time when our intestines may host the likes of barium, mercury, lead, and radioactive strontium.

Though for most of us sea vegetables are an acquired taste, their culinary and health benefit makes acquiring a taste for them well worth the effort. Eden can help, with 12 of the finest Sea Vegetables in the world, selections to please the beginner and the well initiated alike. All are exclusively from Japan — renowned for their purity, superb textures, superior flavor, and remarkable nutrition. Each is cultivated or wild harvested from Arctic current, environmentally protected waters and prepared by centuries old traditions. If eating sea vegetables is challenging to you, start with the mildest like Agar Agar, Arame, and Nori. Try adding EDEN Instant Wakame Flakes to miso soup. Sprinkle EDEN Nori Krinkles and Spicy Nori Strips on noodles, rice, and salad. Visit our website for dozens of other ideas and recipes, and see edenfoods.com/sushi for step–by–step sushi nori roll instructions. 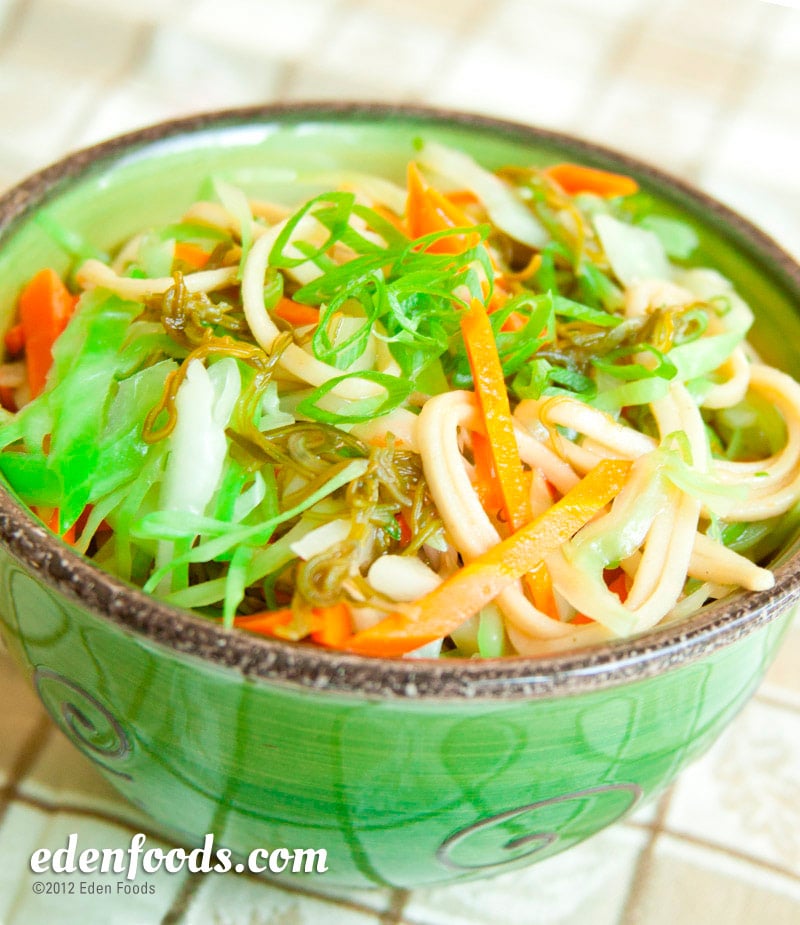