Olive trees symbolize fruitfulness and health, strength and prosperity, and Peace. Evidence of humankind's love for this tree and its fruit is woven throughout history, in mythology and art, and in the scriptures of Judaism, Christianity, and Islam. In Genesis a dove presented Noah with an olive branch, signaling the end of the flood. A Quran verse describes a likeness of the light of God “…kindled from a blessed olive tree, an olive that is neither of the east nor the west, the oil of which could shine without being touched by fire.” In Greek mythology Athena and Poseidon competed in a challenge to bestow the best gift to the mortals. Poseidon presented a spring (or in some tellings, a warhorse). Athena presented an olive tree. This was judged to be the greatest gift to humanity and hence the city Athens was named after the goddess in gratitude.

The olive tree Olea europaea is a cousin to lilac, jasmine, and ash. Its fruit is either cured and eaten, or made into oil. While all other vegetable oils are extracted from seeds, olive oil is the only one made from a fruit. The rarest and finest, Extra Virgin, is considered one of the world's most flavorful and healthful culinary oils. According to the International Olive Oil Council (IOOC) that certifies authenticity for most of the world's olive oil, Extra Virgin oil must come from the first cold pressing of the olives, contain no more than 0.8 percent acidity, and have superior flavor as judged by expert tasters. However, the United States does not recognize IOOC guidelines, so it is wise to do a little research to make sure that you're getting the real thing. EDEN Extra Virgin Spanish Olive Oil meets the strict IOOC guidelines and is an authentic ‘cold’ pressed Extra Virgin Olive Oil.

“All Around Best Buy”

EDEN Olive Oil comes from centuries old, family tended olive groves in the Andalusian region of southern Spain. A blend of green and dark purple olives — Hojiblanca, Arbequina, and Picual varieties are hand selected, stone ground, and gently pressed. Only the first pressing of these olives become EDEN Extra Virgin Olive Oil. This method best preserves the oil's superb flavor and aroma, golden–emerald color, and valuable nutrients. Free fatty acid test results vary from year to year and crop to crop due to seasonal variations. 2007 results averaged 0.24 percent. Amber glass and nitrogen sealing further protect and preserve. EDEN Olive Oil was Prevention Magazine All Around Best Buy, scoring the highest in flavor and protective nutrients of all 22 brands studied while costing less than most other extra virgin olive oils. In the nutrition study, a laboratory measured beneficial oleic acid and squalene, a rare antioxidant essential fatty acid. EDEN Olive Oil was found to have the highest level of protective nutrients in the most beneficial ratio. At the taste test, EDEN Olive Oil was rated the best in flavor with “zesty, buttery, assertive taste.” 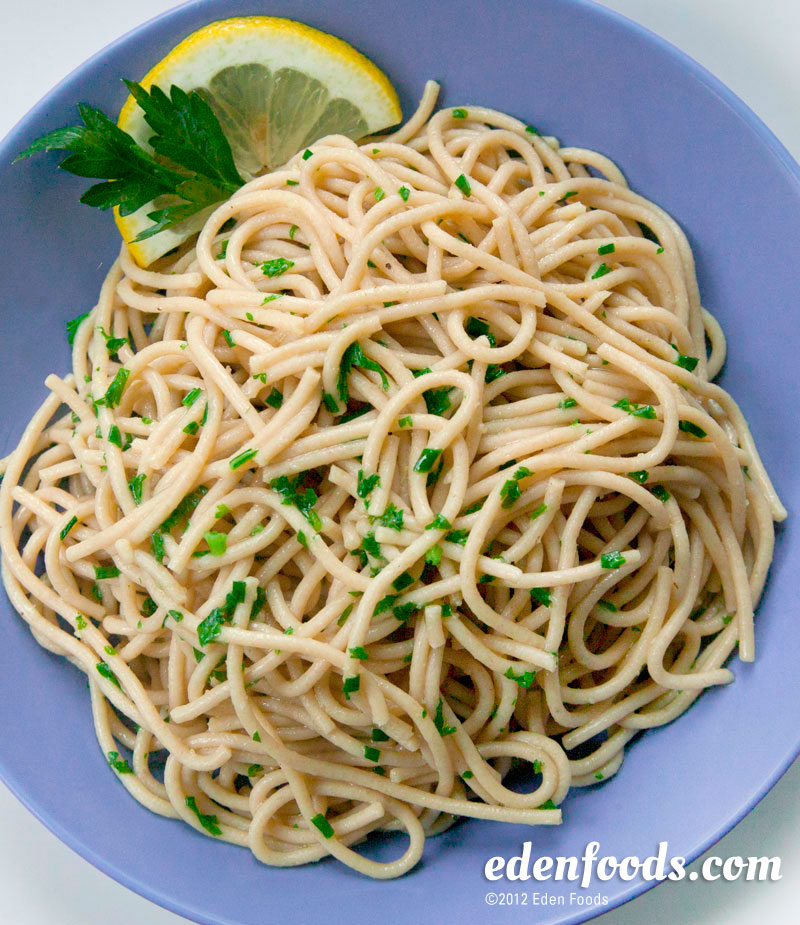 Spaghetti with Olive Oil and Herbs