Hearty stews of beans, grains, vegetables, and seasonings are enjoyed the world over for lots of good reasons. They nourish deeply, satisfy, comfort, and are fairly easy to make. Chili is a good example and an American favorite.

There are as many stories about chili's origin as there are recipes and ingredients. Spicy stews were common in Mexico, but the Tex-Mex classic we know as chili is said to have originated in San Antonio, Texas during the 1880s. In its open-air plazas the ‘chili queens’ sold their delightful, fiery ‘bowls o'red’ from brightly painted wagons. Chili was simmered in cook pots over wood fires and served to crowds of people while musicians of the plaza filled the air with rhythmic music. Open-air stalls matured to sit down chili parlors. It is reported that the chili parlors made the difference between starvation and survival during the Great Depression, because chili was reasonably inexpensive and the crackers were free.

In 1977 the Texas legislature declared Chili to be the Official Food of the State of Texas. Chili preparation is taken quite seriously there, and it always contains meat cooked with peppers, onions, cumin, and chili spices. Little else is added. They have a saying in Texas, “If you know beans about chili, it's that there's no beans in chili.” This chili is called ‘chili con carne’ and means ‘chili with meat.’ Beans in chili are forbidden in Texas chili competitions, and so it is written in the chili competition rulebooks.

Preferences have changed over time and now chili recipes include ingredients that address more needs and allow more creativity. The famous Texas automotive designer, Carroll Shelby said of chili - “The beauty of chili is that it's really a state of mind. It's what you want when you make it. You can put anything in there you want, make it hot or mild, and blend the spices for what you feel like at the time. You make it up to suit your mood.”

EDEN Chili with whole grain, beans, and shiitake and maitake mushrooms has chewy texture and provides sought after, long lasting satisfaction. Spectacular ingredients create exceptional chili of choreographed flavors. Everything but the mushrooms (grown chemically free in Japan) is 100% organic. Beans, barley, kamut and spelt are U.S.A. grown. Quinoa is small plot, high altitude from the Andes mountains. They are cooked in a rich, savory sauce of organic tomato puree, a bit of EDEN sea salt, and a blend of all organic chili spices at Eden's certified organic cannery.

Your pantry deserves award-winning ‘Best Meal Makers’ EDEN Chilies. They make it easy to have tasty, nutritious meals in minutes. Heat & Serve or add your favorite fresh ingredients. They are versatile as a main or side dish, as topping, and for preparing traditional Mexican dishes. With autumn upon us a hot bowl of EDEN Chili will warm and sustain us. 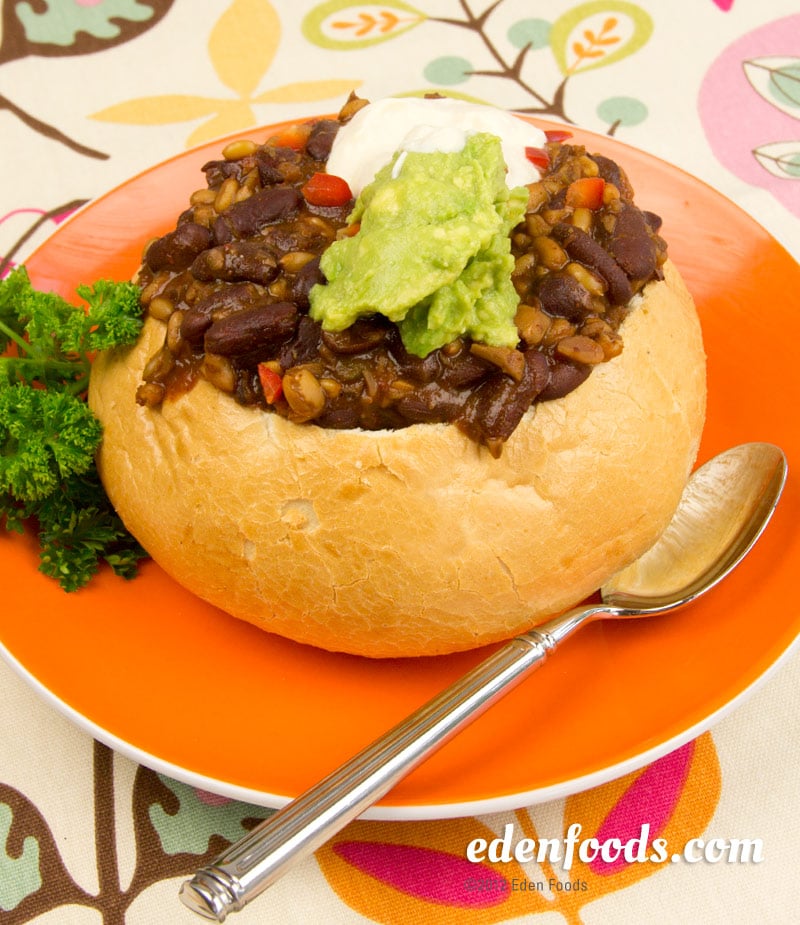