Of the Cold Sky

Jello, jelly, pudding, custard, aspic, and pie — are a few of many delightful dishes that can be made with agar agar.

Sometimes known as agar and kanten, agar agar is a Malay term meaning “jelly.” This sea vegetable gelatin comes from red sea vegetables in the Gelidium and Gracilaria genera. In Japan it's called kanten or “cold sky” because traditionally it's made during the winter using cyclical freezes and thaws. The Japanese have enjoyed tokoroten, a dish of thin agar agar strips, for over 1,200 years. According to legend a 17th century lord traveling near Kyoto was served tokoroten. Leftover agar was discarded outside where it froze overnight. A passerby took home the frozen bar and cooked it into a new version of tokoroten. This freeze–dried kanten had a much more pleasing taste than the original agar, making it a celebrated addition to traditional Japanese fare.

EDEN® Agar Agar Bars and Flakes are created using the same age-old drying method described in the legend. Most commercial agars are processed with sulfuric acid and bleach to remove its taste. In contrast, EDEN Agar Agar is naturally frozen and thawed repeatedly outdoors to produce the desired results.

Agar bars and flakes begin as sea vegetables grown wild in the pristine, temperate waters off the east coast of Japan. EDEN Flakes come from eight varieties of Gelidium red algae and the Bars come from eight varieties of both Gelidium and Gracilaria red algae. These sea vegetables are hand–harvested and spread on the beach to dry under the autumn sun. In winter the dried plants are transported up the mountains where they are softened by cooking in water. The resulting gel is poured into trays, allowed to cool, and cut into bars. The bars are taken outside where they are suspended on bamboo racks over snow–covered rice fields. For ten days the agar agar goes through freeze–thaw cycles. Each night the bars freeze and during the warmer days the ice melts and runs off. After ten days all of the moisture is removed, creating finished, lightweight EDEN Agar Agar Bars. EDEN Agar Agar Flakes are made in exactly the same way but with one additional step. After the bars have fully dried they are crushed into flakes.

Agar agar is a very healthy food. It is comprised of over 80% soluble fiber, and a single serving of EDEN Agar Agar Bars provides 21% Daily Value (DV) of fiber. The agars are high in iodine and contain trace amounts of calcium, iron, and magnesium. As a low calorie, low sodium, and fat and cholesterol free food, agar is satisfying without being heavy. In fact, the “kanten diet” currently popular in Japan recommends eating agar as a simple way to feel full. In addition, unique polysaccarides catalyze metabolism of fats.

Agar agar is an excellent alternative to harshly processed animal leftovers derived gelatins. Use it in place of commercial gelatin to make delicious dishes including fruit salad, finger gelatin, pudding, preserves, and much more. Fruit aspics, also called kanten in Japan, are easy to make with EDEN Agar Agar Flakes, fresh fruit, and EDEN Dried Fruits and Fruit Juices. A variety of delicious kanten recipes are available free on our website: edenfoods.com/recipes.

Another way to enjoy agar is as a thickener for pie fillings. Two delicious pumpkin pie recipes are available in the recipe section of this website. 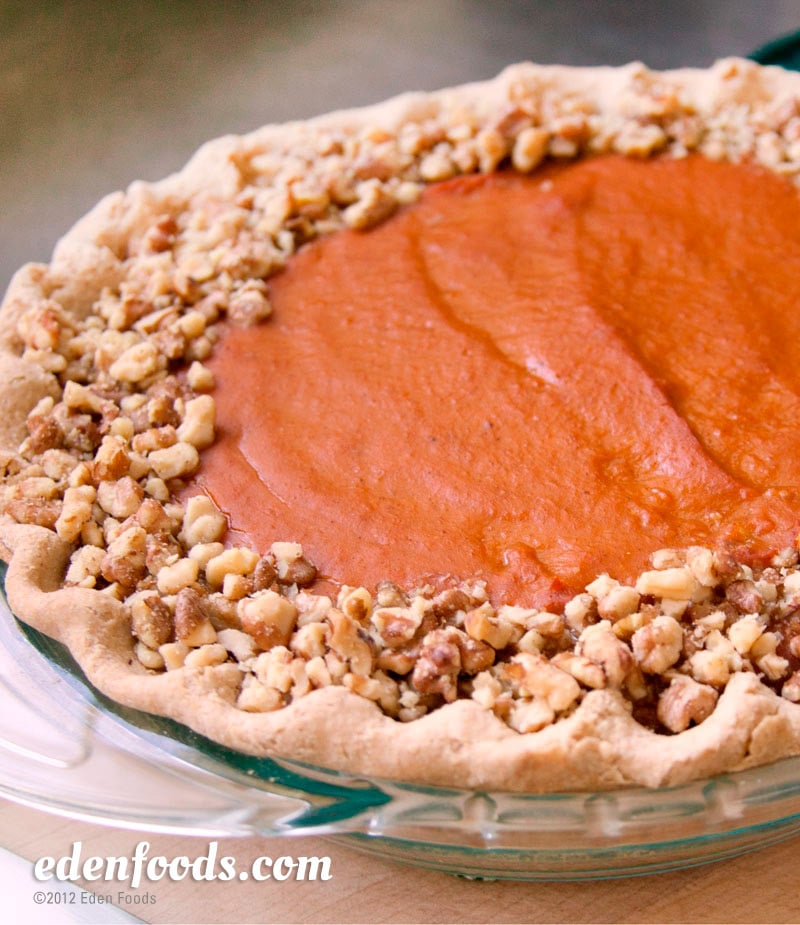