An antidote for bad

The first sentence of the Book of Tea, in its first chapter titled The Cup of Humanity is, “Tea began as a medicine and grew into a beverage.”

Tea is the world's most popular beverage. Tea drinking predates coffee by 3,000 years. Its initial promotion is credited to Emperor Shen Nung of China, “The Divine Healer” back in 2,700 B.C.

Monks brought tea to Japan from China in the 9th century. Later a Japanese Zen monk, My?an Eisai introduced the idea of drinking tea for health. His teachings in the Treatise on Drinking Tea for Health (Kissa Yojoki) focus on tea's benefits and effect on longevity.

Myoan Eisai also introduced drinking powdered green tea in the matcha style. Eisai called matcha the ‘Elixir of the Immortals.” A major part of Kissa Yojoki is dedicated to the five-element life force theory - fire, earth, metal, water, and wood; the five corresponding major organs - heart, spleen, lungs, kidneys, and liver; and the five tastes - bitter, sweet, pungent, salty, and acidic/sour that nourish the organ's optimum health. Eisai found the Japanese diet of the time deficient in the bitter taste, attributing that to the prevalence of poor heart condition. Matcha provided a remedy for this, he taught. Gradually, matcha became a National Japanese Cultural Treasure after becoming almost sanctified in the Japanese Tea Ceremony. Ironically, green tea and matcha are elegantly simple drinks.

For centuries, monks have used green tea to increase energy, calmness, and concentration during meditation and study. They perfected ways to grow tea under shaded conditions to maximize healthful properties. Shading nets protect tea buds and leaves from the harsh sun.

Unlike leaf tea that is steeped and then discarded, after whisking, matcha tea is completely consumed. Modern study confirms the health benefits of matcha, pointing to green tea's antioxidant polyphenols, especially the most prominent epigallocatechin gallate (EGCG). It, together with flavonoids and tannins collectively referred to as catechins, account for 40% of green tea's dry weight. Green tea's antioxidants are found to be 100 times more effective than vitamin C, and 25 times greater than vitamin E. Link to Matcha photo essay

EDEN Matcha, stone ground powdered green tea, is grown and handcrafted by a family company dedicated to producing the finest ceremonial grade matcha since 1888. They have an 80% market share for it in Japan because it is so exceptional. Certified organic Camellia sinensis tea bushes are shade grown to protect their earliest budding Spring leaves. Harvesting season varies, typically the end of April to early May. Only the most tender leaves are hand picked for matcha. Immediately after harvest the leaves are steamed to prevent oxidation or what is called fermentation, and to preserve the bright green chlorophyll. These leaves, now called Aracha, are dried. Aracha is hand sorted and graded by experts. The stems, twigs, and veins of the leaves are hand removed until only the pure, soft leaf remains. This is cut into small pieces known as Tencha, meaning to mortar or grind. Tencha is then ground by one of 1,500 small granite stone mills that take more than an hour to mill 30 grams of organic EDEN Matcha. The matcha powder is sealed in 30 gram tin cans. The can and built-in oxygen absorber protect flavor, aroma, phytonutrients, and the brilliant color of organic, ceremonial grade EDEN Matcha.

Lesser grades of matcha feel coarse when rubbed between fingers and have a distinct astringent bitterness. They tend to be made from older, lower leaves and lack the color, taste, values, and powdery velvet of EDEN Matcha.

The Cup of Humanity

New cultures and people are discovering the delight and benefits of this brilliant brew. As a hot or chilled drink, matcha's popularity is growing. Matcha is also an exceptional ingredient for smoothies, baked goods, confections, kanten (healthy gelatin made of agar sea vegetable), and more. Visit edenfoods.com for many free and shareable Matcha recipes.

Everything necessary to prepare and enjoy matcha is contained in the EDEN Matcha Tea Kit - A boxed set with a 30 gram can of EDEN Matcha, a handmade ceramic bowl, handmade bamboo whisk and spoon, and an interesting DVD that shows how to make matcha and tells some history and benefits. Take a moment and delight in organic EDEN Matcha. One gram of it, some warm/hot water, and a whisk. It is simple and immediately rewarding. 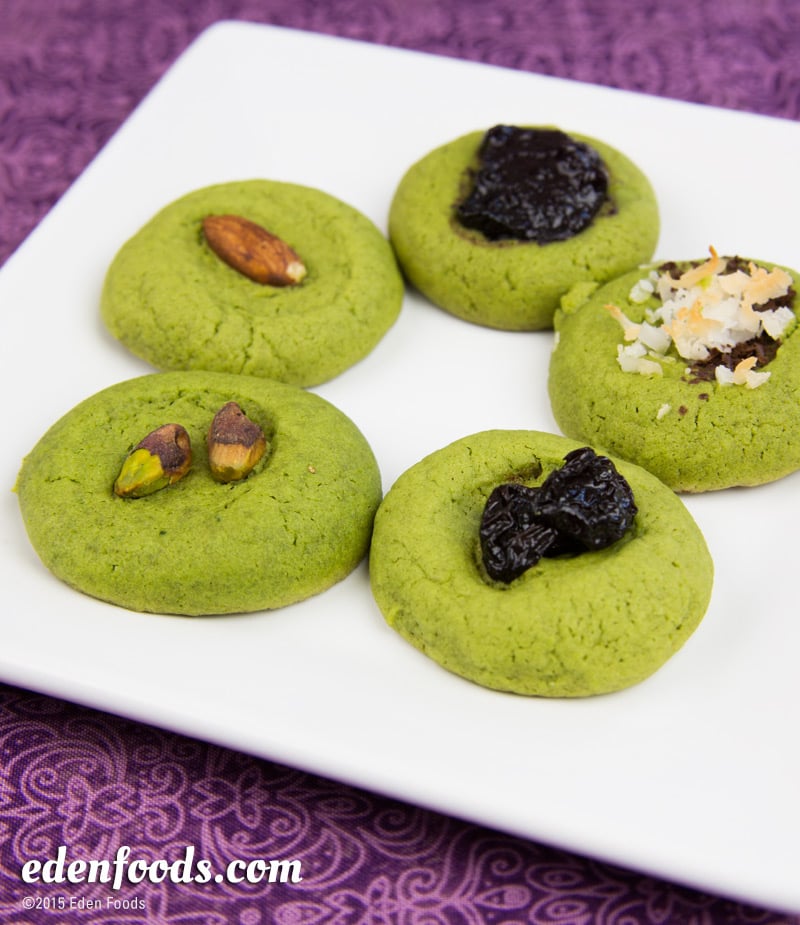