Beans are extremely ancient good food, broadly linked to the first societies on earth. There is also a long history of fermentation of beans. Fermentation unlocks the beans’ storehouse of nourishment, making them easier to assimilate and adding valuable nutrients. Today, beans are fundamentally important all over the world, crucial in the well-being of people and society.

There are 40,000 bean varieties in seed banks, very few of which are being cultivated despite being grown in more than 150 countries. Beans can be stored for years, and are essential to any concept of a food security plan, personal or national. They are relatively easy to grow and require low amounts of water to do so. Beans compliment most other foods and are extremely versatile. When cooked, two cups (a pound) of dry beans yield six cups of highly nutritious, protein-rich food.

Wholly underappreciated, beans are potent superfood. They provide small amounts of very good fat, are high protein, have excellent fiber, complex carbs, vitamins including the Bs, minerals like zinc, potassium, magnesium, and a lot of remarkable antioxidants and phytonutrients.

Recently, beans were found to be rich in antioxidants similar to those in berries and fruit. “Beans are really loaded with antioxidant compounds,” said Clifford Beninger, Ph.D., an environmental biologist and former researcher for the USDA’s Bean Research Unit. “We didn't know how potent they were until now. In general, darker colored seed coats were associated with higher levels of flavonoids, and therefore higher antioxidant activity.” Researchers tested the antioxidant activity of flavonoids found in 12 common varieties of dry beans. They found one class of compounds in particular, anthocyanins, were the most active antioxidants in beans. These findings add antioxidant activity to a growing list of healthy compounds found in beans and legumes. The study was published in the Journal of Agricultural and Food Chemistry. “Beans are probably the best human plant food there is,” plant geneticist George L. Hosfield, Ph.D., told Reuters Health. “With the additional bonus of their antioxidants, you have almost the perfect food.”

Cream of the Crop Organic

Eden Foods has worked to increase American organic bean farming since the late 60s. EDEN authentically organic beans are American grown. We purchase them directly from farmers we know and trust. This salt-of-the-earth growers network began using organic methods decades ago. Practiced tending and vital soils teeming with life now grow the best beans we can find. Most EDEN Beans are grown in the Midwest within a few hundred miles of Eden headquarters. Chickpeas and lentils are exceptions, needing an arid clime like those of California, Arizona, and the Great Plains. EDEN Beans, from vital soils, taste better and are more nourishing.

Cooking EDEN Dry Beans from scratch is time well spent. While a pot of beans or bean soup cooks, it adds soothing comfort to a home. Boxes of 16 oz. EDEN Dry Beans include an Eden kitchen-tested recipe on the back. For helpful preparation tips, soaking and cooking instructions, visit Dry Bean Cooking Basics on Eden’s website.

cannery in east central Indiana. They are prepared in ways developed in home kitchens. Only pure water is used in washing, soaking, and pressure cooking. The beans are soaked overnight, a unique step in the canning industry that makes them taste better and easier to digest and assimilate. EDEN plain beans are cooked with a bit of kombu sea vegetable. The kombu is tasteless, but rich amino acid and trace mineral profiles enhance the taste of beans without the need to add salt.

In early preparations to make canned beans, Eden Foods was told it was necessary to add at least two chemicals: calcium chloride to harden the skins so they wouldn’t fall apart when cooked, and calcium disodium EDTA to hold the color. These chemicals are in virtually all other canned beans. EDEN Beans are prepared without chemicals, just pure water, and they come out perfect. Due to long-term organic soil growing EDEN Beans, a higher mineral content allows them to be cooked without the need of these undesirable processing chemicals.

Whether 16 oz. boxes to soak and cook at home, or a 15, 29, or 108 oz. can for quick meals, organic EDEN beans are great tasting, versatile food. Use in soups, stews, casseroles, salads, dips, spreads, tacos, enchiladas, tamale pie, burritos, chalupas, salsa, and botana. 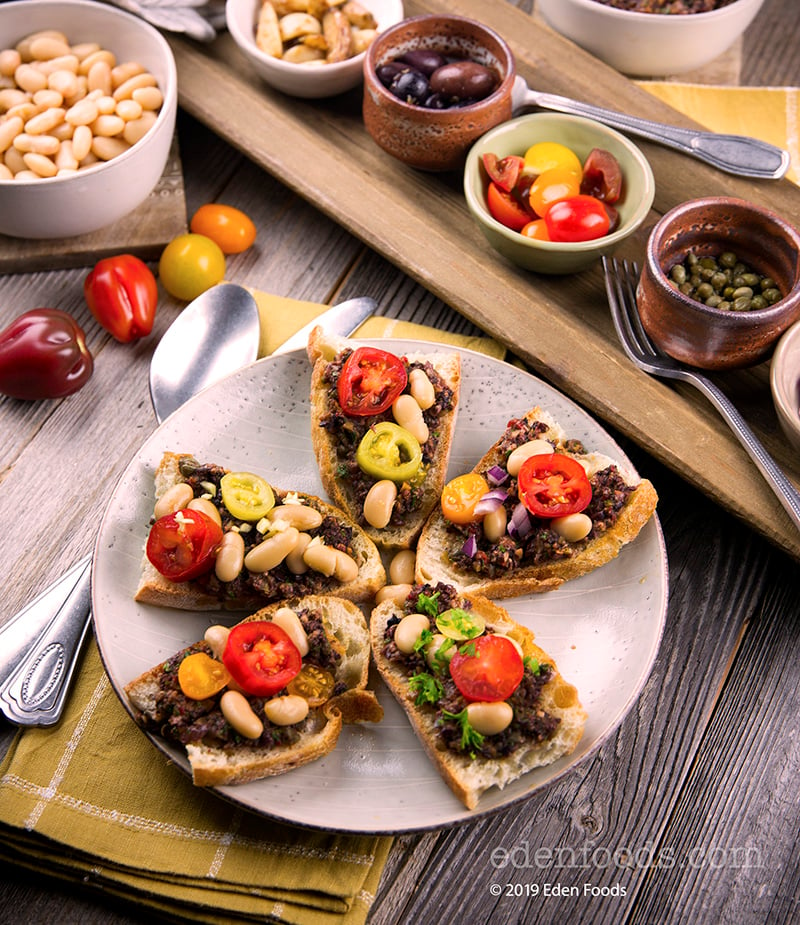