In the West, microbial food processing (fermentation) has been most popular using dairy milk. In Eastern cultures, microbial fermented food has centered on soybeans in making miso, soy sauce, natto, tempeh, and the like; very little dairy. Traditional miso and soy sauce are fermented/  brewed, enzymatically digested, and aged. Alcohol and vinegar are also made using fermentation.

In fermentation, microbes break down proteins into their component amino acids. They convert complex carbohydrates into simple sugars while generating new phytonutrients of important nutritional value. The microbes do this by creating enzymes that cause the changes.

Miso is the quintessential fermented food. It has been referred to as ‘pickled beans & grain.’ It is a nutritionally dense fermented bean paste, usually with a grain. Miso’s popularity goes back thousands of years. Only very recently has it begun to be understood, appreciated, and valued in the West as an exceptionally protective probiotic/prebiotic superfood. It is much easier to reduce or cease dairy consumption if miso is taken regularly. Misos, like traditionally fermented organic EDEN Miso, are strengthening, soothing, and restorative.

Pickling, or lacto-fermentation of food, is an ancient preservation technique that produces beneficial bacteria, enzymes, and organic acids. Lacto-fermentation benefits us by protecting and supporting the growth of friendly bacteria in the gut, improving digestion and overall health. Beneficial bacteria, organic acids, and enzymes increase friendly, good bacteria while suppressing the bad. Lactobacillus bacteria thrive on sugar (carbohydrates) and produce lactic acid. They are used to make fermented foods such as sauerkraut, pickles, kimchi, and sourdough breads. They lend a tangy, sour taste to foods.

Good sauerkraut is an extremely beneficial lacto-fermented food. Fermented cabbage has intensified value and remarkable efficacy. Fermentation produces numerous healthy compounds not found in raw cabbage which is abundant in glucosinolate. In fermentation, enzymes completely change glucosinolate into several other nutrients, the majority of them being strongly beneficial isothiocyanates, a class of antioxidant compounds. “We are finding that fermented cabbage … is healthier than raw or cooked,” said Eeva-Liisa Ryhanen, Ph.D., research manager of MTT Agrifood Research, Finland. Isothiocyanates are common to cabbage and other cruciferous vegetables such as cauliflower, kale, collards, turnips, brussel sprouts, wasabi, horseradish, mustard, radish, watercress, and capers. Fermentation aids digestion and boosts immune strength. Current research is adding to a number of studies showing cabbage and cruciferous vegetables as the best source of several valuable phytonutrient indoles.

While pickled and fermented foods are known for probiotics, little is said about their prebiotics. Probiotics are microorganisms that benefit gut health. Prebiotics are food compounds that help beneficial bacteria multiply in the gut. They are composed of fructans, galatans, inulins, polysaccharides, oligosaccharides, and fructo-oligosaccharids, to name a few. Prebiotics pass through the stomach and small intestine without being broken down by stomach acid or digestive enzymes. They are fermented by anaerobic bacteria in the large intestine to provide fuel for beneficial bacteria to multiply and thrive. When beneficial bacteria increase, they keep harmful bacteria in check. Also, as prebiotics are disassembled in the body, they help produce compounds like short-chain fatty acids, help stimulate calcium intake, and improve the body’s ability to break down food. Prebiotics increase the feeling of fullness or satiety for good weight management. In short, prebiotics feed probiotics, both essential to overall well being.

A variety of authentic fermented and lacto-fermented foods are offered by Eden Foods. They are made the old, artisan way without any untoward additives.

• EDEN Miso – are everyday Mugi (barley) and mellow Genmai (brown rice) aged one to two years; Hacho (soybean), the richest and darkest, aged for at least three years; and the sweetest and lightest Shiro (white rice) is aged for just two months. Organic, non-GMO soybeans and grain are cleaned, steamed, cooled, sea salted, and inoculated with koji Aspergillus oryzae spores. The mixtures are allowed to age in large kegs. The duration of fermentation depends on ingredients, type of koji, tending, weather, and the results desired. Fermentation transforms the ingredients into wonderfully beneficial superfood. EDEN Instant Red and White Miso Soups are handmade from pure organic ingredients by skilled makers taking no shortcuts. Subsequent freeze-drying captures and protects the subtleties of these miso soups; taste, aroma, color, and nutrient composition. The two instant miso soups remain unaltered with only water gently removed. They are so handy, there is no longer any excuse for not bettering ourselves with them.

• EDEN Shoyu & Tamari soy sauces are made by brewmasters, heirs of the art of koji fermentation handed down through generations. Shoyu is made from koji Aspergillus oryzae inoculated organic whole soybeans and organic wheat, pure water, and sea salt. Tamari is similarly made, but without mellowing wheat being added. Both are aged and tended in large casks for two years at natural temperatures in the same manner used for over 500 years. The most noticeable quality of fine shoyu is not its own flavor, but rather its ability to combine and harmonize tastes, enhancing the flavor of foods. Tamari is a robust seasoning and condiment that is best for longer cooking and commercial food production where a strong flavor is desired. Tamari”s American popularity has risen from those seeking to avoid the gluten of wheat. The fermentation of shoyu disassembles the wheat gluten rendering it gluten-free. Shoyu cannot be labelled as such even when no gluten exists, due to poor regulations that do not permit it.

• EDEN Umeboshi – pickled ume plums, sun-dried, salted, infused with red shiso (beefsteak) leaves, and aged one year. The nanko plum variety is used, prized for its high citric acid content, juicy pulp, and tartness. ‘The King of Alkaline Foods” — from about 980 A.D. until the 1600s umeboshi was only considered medicine, not until the 1800s did it get adopted into culinary arts. Samurai used it for stamina and as a restorative. The Krebs citric acid cycle (cellular energy creation, storage, & release) or cellular respiration, is energized with umeboshi. EDEN Umeboshi Paste is a citric acid sour condiment of pickled, puréed umeboshi plum. Use it in making sushi, dips, sauces, salad dressing, and for seasoning vegetables. It is perfect on corn-on-the-cob!

• EDEN Vinegar – four traditionally brewed varieties. Organic Apple Cider and Red Wine Vinegar are raw, unpasteurized, and contain ‘Mother’ of vinegar. Organic Brown Rice Vinegar is made using an amazing 1,100 year-old methods, such as crocks of vinegar stock partially buried in the earth through the winter season to change the fermentation process, mellow and sweeten the taste of the finished vinegar. EDEN Ume Vinegar is the pickling brine of umeboshi plums, raw and unpasteurized. Healthy vinegars, like EDEN , contain beneficial components like organic acids, friendly bacteria, enzymes, and many valuable phytonutrients.

It is wise to choose reliably pure, fermented and pickled foods from a trusted source such as Eden Foods. Today, ancient health foods are counterfeited / imitated; made with cheap ingredients, refined salt and sugar, petrochemical derived vinegar, toxic colors, GMOs, and various chemicals that must be avoided. Today’s label laws allow this to be hidden completely. Keep EDEN Miso, Soy Sauce, Krauts, Pickles, Condiments, Vinegar, and other pure food in the pantry.

There are many free recipes at edenfoods.com/recipes. 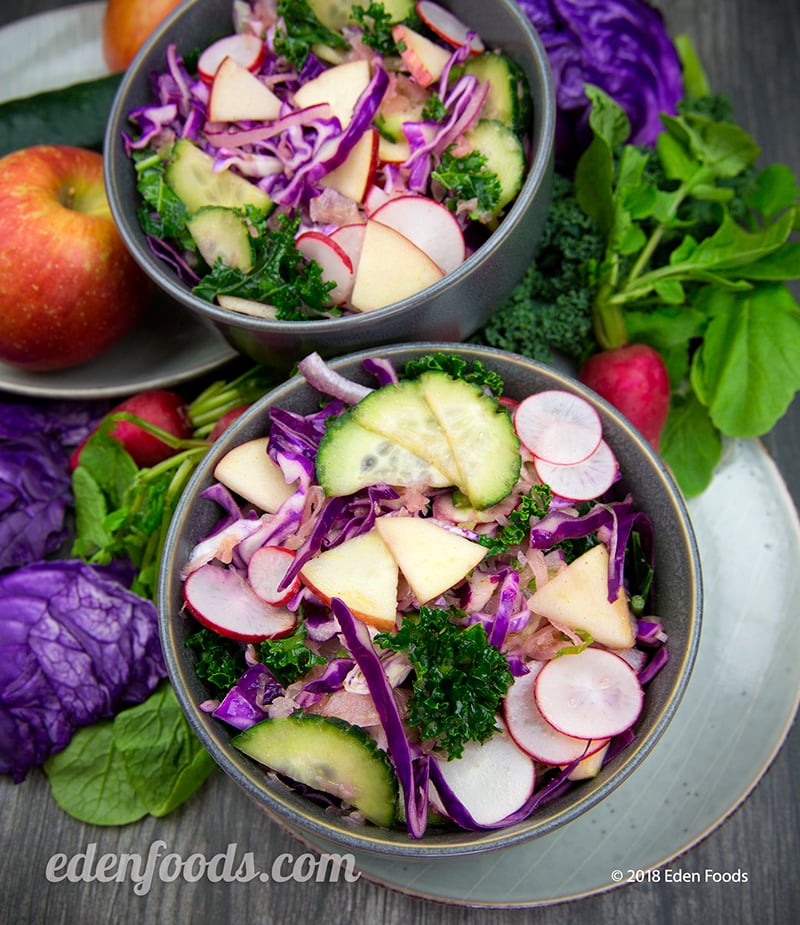