Growing beans benefits the farm, farmer, and the environment. For us, beans are a brilliant source of high quality protein, complex carbs, good fats, fiber, vitamins, minerals, and protective antioxidants essential to well-being. They are deliciously beneficial, bracing, and protective food.

Beans are superlative in their role as a farm field crop rotation choice. They enrich the soil they grow in, encouraging life in it. Bean plant roots fix nitrogen into the soil for use by crops that follow.

Using beans in hearty stew of grain, vegetables, and seasonings warms the body, heart, and souls of people all over the world. The stews nourish, calm, comfort, and are delicious. Ingredients are easy to grow, transport, prepare, and are economical.

Diminishing the perceived value of beans and grain is prevalent disinformation about food, nutrition, and cause of disease. This has enabled miserable government policies for healthcare, agriculture, and nutrition that strongly contribute to horribly destructive environmental, economic, and medical practices.

Chili is hearty American stew. While spicy stews are common in Mexico, origin stories of chili are as varied as its recipes. Chili came out of central Texas in the 1880s. In 1977, Texas law declared Chili the Official State Food. Surprise, there are no beans in traditional Texas chili, it is chili con carne (chili with meat).

Chili recipes today usually include beans, tomatoes, onions, sweet bell & chili peppers, grain, sweet corn, pasta, and a range of herbs & spices. Carroll Shelby, a Texan automotive star, summed up today’s approach to chili, “The beauty of chili is that it’s really a state of mind. It’s what you want when you make it. You can put anything in there you want, make it hot or mild, and blend the spices for what you feel like at the time. You make it up to suit your mood.”

For many folks, chili has moved away from factory farm (very poor quality) meat, from chili con carne to chili sin carne (without meat).

Four styles of EDEN bean and whole grain chili are made in 14.5 and 29 oz. BPA, BPS, and phthalate free cans:

EDEN Chili is the only bean and whole grain chili we know of. The beans and grain provide complete protein. The whole grain, shiitake & maitake mushrooms are chewy and replace the hamburger texture nicely. The ingredients are grown and handled without untoward chemical by those we know and trust, and the chili is made at the Eden cannery Meridian Foods in central Indiana.

Textured vegetable protein (TVP), a chemically refined GMO soya extract, is ubiquitous in commercial and natural chili brands. TVP is even in vegetarian/vegan brands, and those with mystery meat.

EDEN Chilies are unique using U.S. authentic organic EDEN beans and grain, non-irradiated organic spices, no TVP, GMOs, sugar, or toxic chemicals. They are warmly delicious, pure nourishment with half the sodium of others. Heat, stir, and serve anywhere, any time.

EDEN Chilies were honored with the Selling Wellness Trailblazer Award as a Meal Maker by Grocery Headquarters magazine. They were deemed a Best Food for Women by Women’s Health and both a Best Food for Men and a 125 Best Foods for Men by Men’s Health.

Refried Beans are another Tex-Mex winner that originated in border town restaurants. The phrase refried beans is from the Spanish frijoles refritos; frijoles are beans, refrito is well-fried. Another factor behind “refried” may have been the Mexican habit of adding the prefix ‘re’ to emphasize a word’s special meaning. As popularity of frijoles refritos spread into the United States and Canada, the new name ‘refried beans’ was carried along.

Most commonly, refried beans are not fried at all, just pureed and further cooked in steam jacketed kettles. Any bean can be prepared as refried beans, but the most popular are pinto and black beans. Eden Foods began making dark red kidney refrieds because of their abundance of antioxidants similar to those found in berries and fruit.

Bean versatility is accentuated in the refried form as they can be easily used as a base for creamy soups and stews, sandwich spreads, dips, casseroles, and other dishes where whole beans are not ideal.

To have them at home, place a small amount of water and/or oil in a skillet or pan, add the beans, and heat slowly while mixing them. Onions, peppers, sweet corn, and fresh lime are nice adds. Serve them as a side, on burritos, layered dips, with most dishes. They provide complete protein when served with good grain.

EDEN Beans, including those in EDEN Chili and Refried Beans, are thoughtfully prepared at Eden’s certified organic

cannery in east central Indiana. They are prepared in ways that were perfected in home kitchens, like using kombu. Purified water is used in washing, soaking, and cooking. The beans are soaked overnight, a rare step in the bean canning industry, making them easier to digest. Since April 1999, all canned EDEN Beans are packed in BPA, BPS, and phthalate free cans. 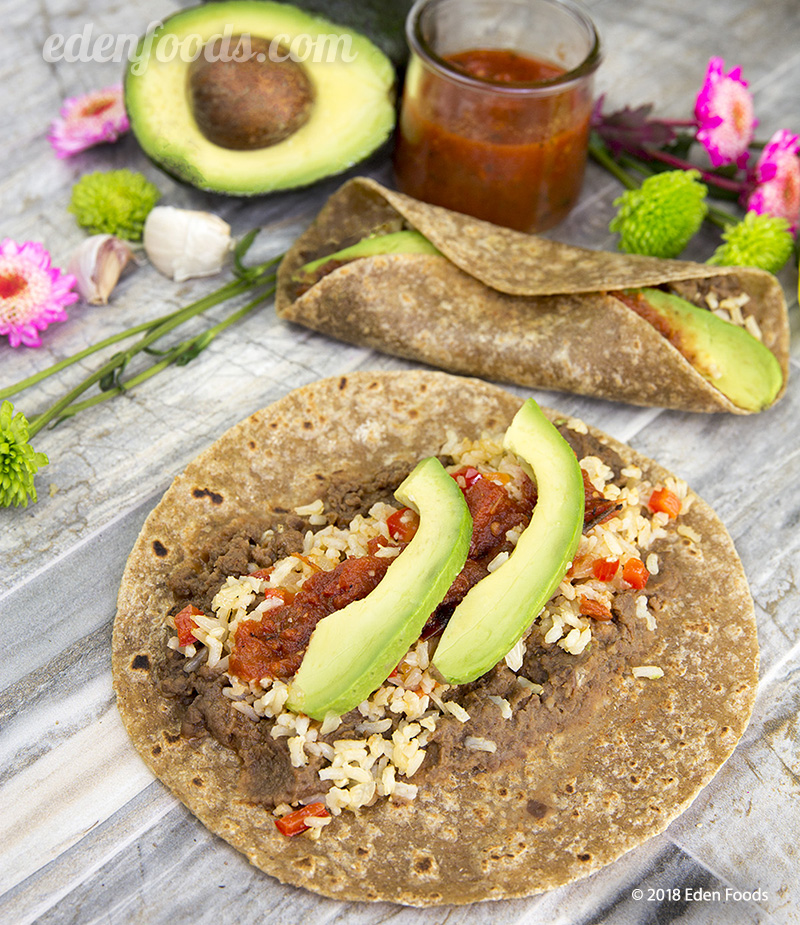