Sea vegetables provide essential, rare nutrients in amounts, proportions, and ways that complete us. Cultures the world over recognize sea vegetables as valuable food, and the best (mostly the only) source of important nutrients. Sea vegetables are unique food in preparation, taste, and benefit. There are six popular varieties: Nori, Wakame, Arame, Hiziki, Kombu, and Dulse. Americans are generally unfamiliar with them. There is definitely a learning curve. Following is an overview of why including EDEN Sea Vegetables is a very good idea. We suggest learning, enjoying, and sharing their rewarding culinary and health benefits.

Sea vegetables have profound positive impact on the body, serenity, and well being. They provide a complete spectrum of imperative trace minerals that are not available in foods from land. According to Professor Moriteru Arasaki, University of Tokyo, sea vegetables, “… have more minerals than any other kind of food.” They contain every mineral essential for human health, plus an array of cleansing phytonutrients, and fat metabolizing and eliminating polysaccharides, as well as vitamin A, Bs, C, D, E, and K. They contain important selenium, often lacking in land vegetables due to mineral depleted soil or over processing. Sea vegetable minerals are in a chelated, colloidal form that makes them readily absorbable and available to the body’s chemistry.

A uniquely important sea vegetable attribute is their cleansing effect. This action is linked to alginic acid, a polysaccharide abundant in EDEN Wakame, Kombu, Arame, Hiziki (or hijiki), and Mekabu. Heavy metals like barium, mercury, lead, cadmium, radioactive strontium, etc. from environmental pollution are in us all. Research lead by Dr. Yukio Tanaka at McGill University in Montréal demonstrated that alginic acid, common in sea vegetables, binds with heavy metals (including radionuclides) rendering them into forms that can be harmlessly eliminated from the body. Dr. Tanaka’s research has shown alginic acid attaches to and draws out the pollutants that we have accumulated, “… lowering the body’s burden.”

Fucoidan is a particularly beneficial compound. It is a polysaccharide found in the cell wall of brown seaweeds like EDEN Kombu, Wakame, Wakame Flakes, Mekabu, Arame, and Hiziki. Scientific analysis shows the fucoidan acts as an antioxidant, enhances the immune system and cellular health, supports heart, digestive and thyroid health, and protects the body against heavy metals. It is a renowned fat metabolizer. It helps burn fat. Within the molecular structure of fucoidan is the sugar fucose. Fucose is necessary for proper nerve cell communication to the brain, kidney function, reproductive health, skin hydration, and it fosters a vital metabolism. Mekabu, the flowering sprout of wakame (probably the most efficacious seaweed), is highly valued for its abundance of fucoidan. Mekabu’s slippery, viscous texture is from the fucoidan of its cell walls.

Iodine, a trace mineral, is abundant in all sea vegetables. It is crucial to metabolic functions, but is one of the least abundant minerals in any type o land food. Land vegetables are not considered to be dietary sources of iodine. Broccoli and spinach, dairy and eggs have some; the latter due to iodine enriched animal feed.

The amazing fat burning properties of sea vegetables come from fucoidan, alginic acid, and minerals all working in unison. Researchers report fucoidan being a dynamic compound sugar that provides dozens of benefits, including the acceleration of fat metabolization. The important sugar fucose, part of the polysaccaride fucoidan, does wonders for our metabolism, is a food allergy antigen, and it only comes from sea vegetables.

The alginic acid in sea vegetables has been found by scientists at the University of Newcastle upon Tyne, England to cleanse and strengthen the intestines, improve absorption of nutrients and food energy management. Sea vegetables are fat free, low calorie, and low sodium.

In the 1960s, when seaweeds (that’s what they were called) were introduced to Americans as part of macrobiotics, the common question about them was “Why?” The answer was always, “They are good for the nervous system.” That answer did away with further need of inquiry as to “Why seaweeds?” Now we know more about dynamic nourishment sea vegetables provide and are grateful for macrobiotic pioneers and sea vegetables.

Eden Foods has supplied Japanese macrobiotic grade sea vegetables to its customers and the natural food industry since 1968. We introduced Canadian dulse in 2005. Eden Foods’ keen interest, due diligence, and extensive knowledge of these important vegetables ensures you the finest of each kind. Wild or cultivated, they are hand-harvested from environmentally protected areas designated as national natural treasures. Organic EDEN Dulse is wild grown around Grand Manan Island, New Brunswick, Canada where hand-harvesting using non-motorized boats protects the ecology.

When selecting sea vegetables, it is important to choose a pure, high grade that is suitable for human consumption. EDEN is the best way of doing this. Eden Foods completely avoids U.S. demand spawned counterfeit sources from polluted waters. EDEN Sea vegetables are world renown as the correct variety, for purity, superb flavor, and unique nutritional value. Each one is prepared using the high art of old artisan methods.

Since Fukushima, we have tested all food coming to us from Japan, redundantly, for radionuclides. First, before it leaves there, and again after it arrives to us in the U.S. We do not want to eat, share, or feed radiation to our children. You can depend on us doing everything necessary to avoid that. There have been thousands of, and they continue, tests performed by prestigious, reputable laboratories. Eden Foods and its Japanese suppliers continue to do exceptional, effective work in dealing with this, as it must be. 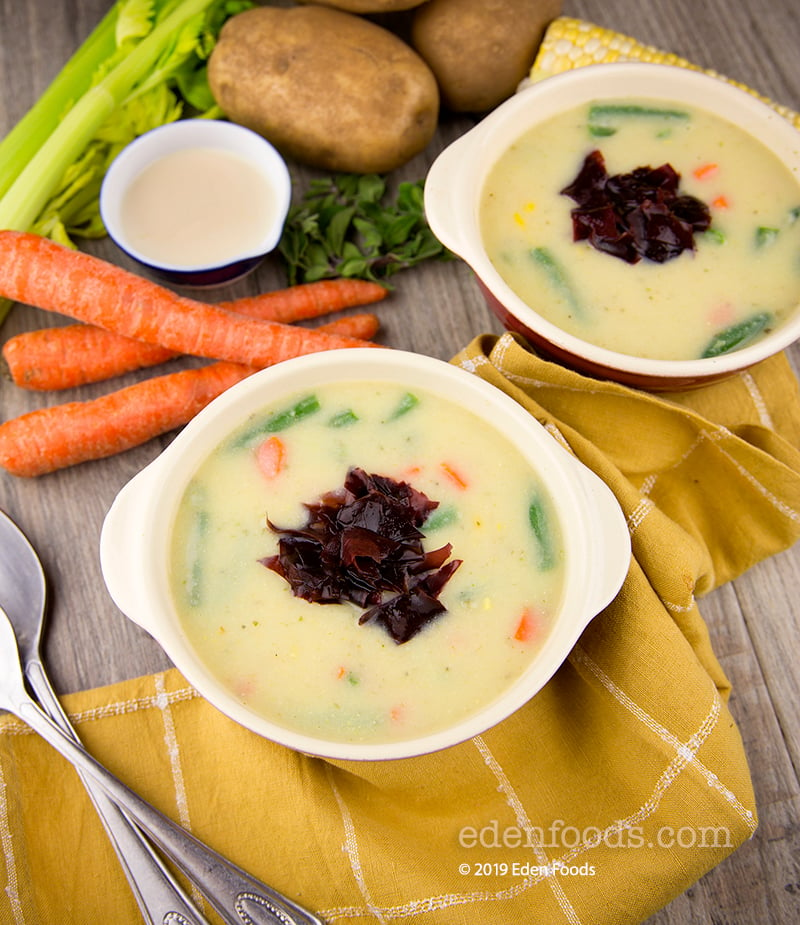