Popcorn is still an American favorite with roughly 17 billion quarts of popped popcorn consumed yearly, more than 70% of which is enjoyed at home. It is also the most popular snack sold at every movie theater in America. Organic EDEN Popcorn is a great snack, not only pure and delicious but a great value compared to other snack foods. A half-cup of whole grain popcorn produces about 16 cups of popped corn, with a soothing and satisfying array of important, beneficial nutritional components.

Popcorn has been part of American culture for thousands of years. 4,000-year-old-popcorn was found in South American tombs that still popped. Learning from Native Americans, European settlers made popcorn on fires or stove tops in a popcorn basket. From the late 1800s through the Great Depression, popcorn street vendors were common in towns and cities of the USA. Steam or gas-powered popping carts were reliably present wherever people gathered in parks, at fairs, parades, and public events. Popped corn was a satisfying luxury that almost everyone could afford. During the Great Depression popcorn businesses thrived, while other businesses failed. Popcorn vendors made a good living, and popcorn made people feel good. As television became a household focus, popcorn street vendors began to disappear.

Popcorn Zea mays everta is a particular variety of flint corn that pops when heat is applied properly. Dent corn, sweet corn, and other flint corns will not pop. It pops because there is water in its starchy endosperm and a hard outer shell or pericarp. Kernels contain 14 to 20% water by weight. Heating the kernels turns the water to steam, which creates pressure until the hull cracks and ruptures. The inside of the kernel suddenly expands 20 to 50 times.

The rate at which the kernel heats up is important to popping results. If heated very quickly, steam can develop in the kernel prematurely, breaking the hull before the starch can fully pop. This creates small, hard popped kernels. Heating too slowly, leaves many unpopped kernels. Heat the oil and then add all the popcorn at once. Organic EDEN Popcorn’s reclosable standing-pouch is built to retain the moisture needed for popping. After resealing refrigerate the moisture holding package to ensure good popping.

Popcorn, by any definition, is a whole grain with all of the beneficial magic associated with them. It is a quick and enjoyable way to take whole grain nourishment. Popcorn was a popular breakfast meal in early America, the precursor to modern Kellogg and Post puffed or popped grain breakfast cereals.

As does all whole grain, popcorn contains beneficial antioxidants called polyphenols that remove cellular damaging toxins called free radicals. Researchers reported these findings in August 2009 at the 238th National Meeting of the American Chemical Society (ACS). Dr. Joe Vinson of the University of Pennsylvania said, “Early researchers thought fiber was the active ingredient for the benefits of whole grain … But recently polyphenols emerged as potentially more important.” Dr. Vinson further reported, “We really were surprised by the levels of polyphenols we found in popcorn. I guess it is because it’s not processed.” They should not have been surprised because all whole grain is a rich source of very beneficial polyphenols.

The Precautionary Principal is abandon. Making food toxic is a crime. In 2003, FDA’s Total Diet Study shows popcorn as one of the top ten foods most contaminated with POPS (persistent organic pollutants). POPS have been found to have serious health implications, even at very low exposure. These chemicals mimic human and animal hormones and pass through the placenta in pregnancy. They have been linked to declining bird and other small animal populations. Avoid POPS in your popcorn with organic EDEN Popcorn. It is a select variety, specifically handled to protect its pericarp from scratching or breaking so that it pops well. If you want large, tender morsels bursting with pure corn flavor and all the health benefits intended by Nature, it's the right choice.

Organic EDEN Popcorn is better for you, yours, and the environment — no chemical additives, preservatives, pesticides, herbicides, fumigants, etc. It is satisfying, yet does not spoil one’s appetite, and it’s rich in healthy nutrients and great food. EDEN Popcorn is hearty, pure 100 percent whole grain; a smart alternative to toxic commercial imitation food. 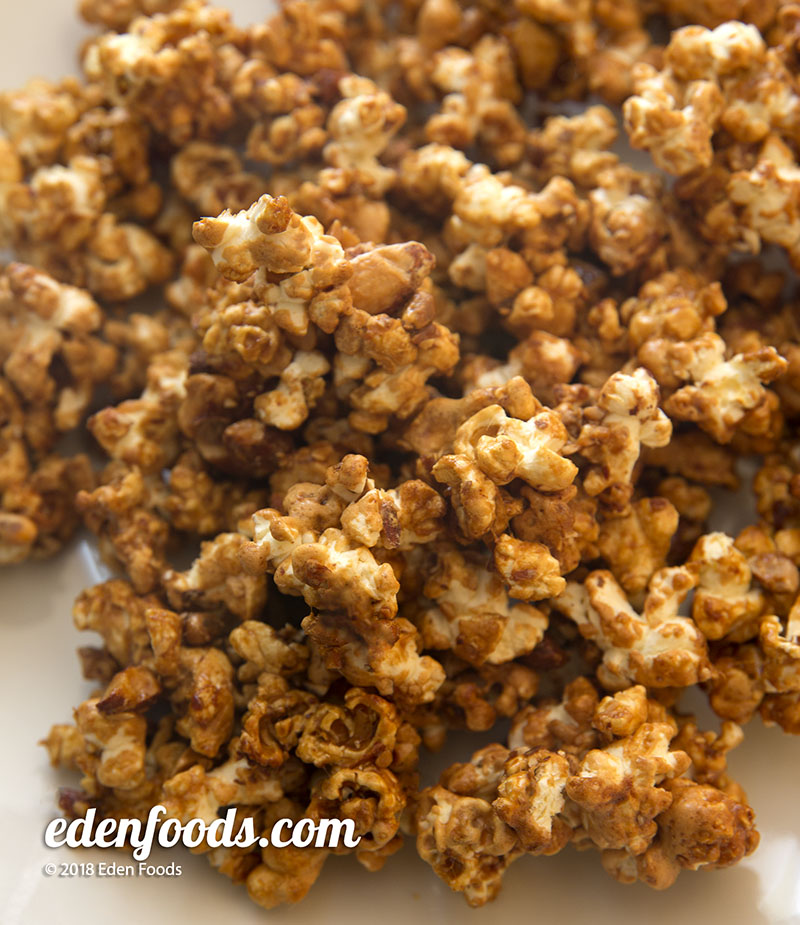