Soybeans require exacting preparation and thorough cooking to properly prepare them as food for people. Doing this reliably requires know-how and specific equipment. Only EDENSOY provides this value. EDENSOY production was moved from Japan to Michigan in 1985 and reintroduced in Tetra Pak cartons. Skillfully made at a certified organic Michigan plant with more than 240 continuous quality control checks, it embodies Eden’s thorough research on how to best choose and prepare soybeans. EDENSOY remains the only soymilk in the USA that is properly prepared to provide good nourishment to human beings.

EDENSOY has always been GMO free, long before public understanding of GMOs developed. Similarly, Eden instituted BPA, BPS, and phthalate free cans when most people in North America had never heard of such things. Eden’s actions led the way in the canning industry’s removal of BPA, BPS, and phthalates from can linings.

Foreseeing the commercialization of genetically modified soybeans, Eden Foods took every step necessary to maintain EDENSOY purity. In 1993, Eden created and implemented a system to avoid genetically modified organisms (GMOs) and their derivatives in Eden foods. The system required participation of every Eden grower and supplier. By 1997, GMO testing protocols were fully implemented. Today, these non-GMO supply systems remain pure, and are verified by The Non-GMO Project as well.

Much work is necessary to keep EDENSOY free of GMOs, including stringent testing of seeds, during growth, at the storage elevator, and at the manufacturing plant. Eden avoids the use of GMO-derived pharmaceutical enzymes and knows all of its farms, fields, farmers, and suppliers.

This caused dozens of food manufacturers to rush to market with ill-conceived, imitation, poorly prepared facsimiles of EDENSOY. Some had virtually no food value other than misrepresented sugar, and all were adulterated with mostly hidden, untoward ingredients.

Those events coincided with a sudden wide use of unethical-but-legal new labeling rules, secretly initiated, that deleted the requirement of every food ingredient having to be declared. This fundamentally changed and limited the definition of ingredient to only those things that impact the nutritional information panel. Overnight, thousands of unappealing and toxic food ingredients no longer had to be declared or listed on packages. This made it nearly impossible for Eden Foods to differentiate its food from commercial versions masquerading as natural foods. A fundamental, completely hush-hush, foundational industry/government coup transformed the food industry, institutionalizing fraud as the number one way profits are made. A coup that created huge cash flows to further encourage political, industrial, and media dishonesty.

Two coinciding events – EDENSOY’s popularity, and new labeling laws allowing legally hidden ingredients – resulted in major damage to public perception of this new liquid-food grocery category. The public was thoroughly hoodwinked with cheap, fraudulent imitations and EDENSOY’s availability diminished markedly. People, having been misled with a cheap price and fraudulent information, were guided to distasteful alternatives that were being big-money marketed as better than anything prior. A good example of the ‘whoever tells the biggest lie wins’ formula, so commonly affecting us all today.

Truth in advertising is long gone, abandoned by the FTC and FDA as part of the aforementioned coup.

When the New York Times tested 11 soy and corn-based foods, only one tested GMO free – EDENSOY. In 2009, Eden Foods submitted EDENSOY to the Non-GMO Project for verification. After thorough analysis covering everything from seed to packaging materials, EDENSOY became America’s first soymilk to be verified by the Non-GMO Project for GMO avoidance.

EDEN Soyfoods achieved the highest score of 955 out of 1,000, and the top rating in the Organic Soy Scorecard. This followed a year-and-a-half-long study into the social, environmental, and health impact of soyfoods in North America. The Cornucopia Institute, an independent advocate working to preserve organic integrity and create economic justice for family farmers, released this report. It evaluated 62 organic brands, rating them on 10 criteria including sourcing, stringency of organic certifier, and prevention of GMO and chemical contamination. Eden was declared a “Hero” and ranked, by far, the highest in the organic food industry. For more information about this, see the report at Cornucopia.org.

Though labeled healthy, many plant-based milks are made of the cheapest available ingredients, hexane-extracted GMO soy isolates treated with a host of toxic petrochemicals, and untoward additives. So-called “natural flavor” is an ingredient found in many types of soy, grain, and nut milks. These flavors are made using petrochemicals, emulsifiers, preservatives, ethanol, synthetic propylene glycol, and more. Often, the natural flavors contain more chemicals than artificial flavors, according to the Environmental Working Group (EWG). The FDA does not require listing of these common “incidental additives” on food labels. Furthermore the EWG says, “Flavor extracts and food ingredients that have been derived from genetically engineered crops may also be labeled ‘natural’ because the FDA has not fully defined what the term ‘natural’ means.” Every American soymilk that we are aware of, except for EDENSOY, contains FDA allowed undeclared, unsavory, untoward chemical flavor maskers. Every ingredient in EDENSOY, in fact in every Eden food, is dutifully declared on its label.

EDENSOY is made from USA Midwestern family-grown organic soybeans and grain. It provides the purest, highest quality whole soy protein, essential fatty acids, and an entire range of nutrients including calcium, potassium, B vitamins, minerals, trace elements, and phytonutrients. Clean, gentle, naturally malted whole grain barley/wheat extract and organic maple syrup sweeteners used in EDENSOY provide far better nourishment and flavor than the widely used refined sugars such as evaporated cane juice and GMO enzyme converted starches. EDENSOY Extra is enriched with the most bioavailable vegan quality vitamins and minerals. It is the only soymilk made with the nourishing sea vegetable Kombu, adding valuable trace minerals and flavor enhancement. Cocoa and Carob EDENSOY are made with organic dark cocoa powder and real carob. Vanilla EDENSOY is the only soymilk in America made with real, 100 percent vanilla extract. Unsweetened EDENSOY is ideal for those desiring the highest protein level available without a sweetener, and it is gluten free. 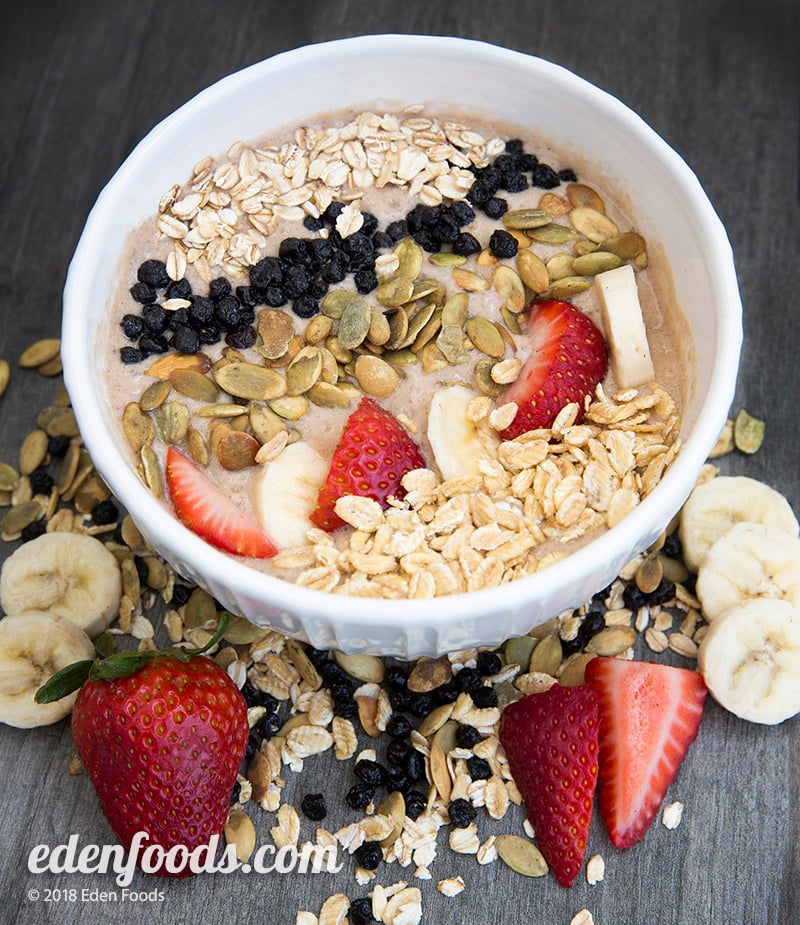