Ethics of authentic pure food must always consider its packaging. Food packaging should support healthy life as much as is possible. Bear in mind the perfect package is a rarity. Food packages for distribution in denser population areas takes this into unicorn–rare. Modern civilizations are way overdue for logical use of packaging that does not harm life. To realize this social development, good judgement must take precedence over logic and goals driven by a cheaper–is–better (oxymoron) race to the bottom.

Being cheaply affordable and landfill disposable has been far too highly prioritized in practices of those espousing endless economic growth and expanding consumerism at all costs. Disregard of longer term costs related to encouraging or discouraging healthy life is government and industry sanctioned. Those costs are proving enormously dear; not just economically, but in the metric of misery, pain, and death visited upon life. Intelligent short and long–term environmental ethics, over immediate profit narrow–mindedness, produces much better pure food, while imparting as little negative effects to life as possible.

Eden Foods’ activities dovetail with a goal of having a strong, positive impact on farming practices and food processing techniques. Eden tracks the environmental impact of food from its suppliers, through its operations, and downstream into social and ecolgical impact. Energy use and conservation are tracked with custom in–house tools. In 2009, Eden Foods was named the “Best Food Company in the World” and the “Third Best Company Overall” by The Better World Shopping Guide. In 2015, Eden Foods achieved the highest company rating earning “Green Hero” status six times, meriting an A+ rating in an astonishing 12 categories, and being selected as one of the “20 Best Companies on the Planet.” Awards like these affirm Eden Foods as an ecologist champion. Sourcing and using ethical, ecological food and packaging has been central Eden work for fifty years now.

Since April of 1999, EDEN canned beans have been BPA, BPS, and phthalate free, beginning with a custom oleoresin c–enamel can lining. This lining was only usable for low–acid foods such as beans, not for tomatoes. In 2016, Eden expanded its BPA, BPS, and phthalate–free cans to include tomatoes and other high–acid foods by transitioning to an updated lining. Can linings are necessary to prevent interaction between the food and tinplate steel of the cans.

After learning about BPA from German sources in 1995, Eden Foods spent more than 2 ½ years persistently trying to get an answer to the question, “What is the food contact surface of food cans?” Those efforts repeatedly hit belligerent barriers as Eden researched and inquired about can linings. Success was eventually achieved in finding what we needed to know. This resulted in Eden Foods being directed to a high–level contact in a Washington, D.C. law firm representing the canning industry. A designated attorney informed Eden Foods that it had no right to know, and that the can manufacturers have no duty to disclose what those surfaces are, or what they contain. Information such as that is shielded from the public by ill–conceived expansions of ‘proprietary information’ and ‘trade secret’ federal legislation. We as citizens, and we as Eden Foods the buyer of millions of cans, have absolutely no right to know what the food contact surfaces actually are. Unfortunately, these demonic barriers are very common in the food and food packaging industries.

The can lining that Eden uses for both high– and low–acid foods is the safest available. It is tested BPA, BPS, and phthalate–free. Eden Foods is confident that it is the cleanest can lining available for the foods it prepares.

In making EDENSOY, Eden Foods makes its decisions based on how to best nourish humanity and be an ethical ecologist. To cook and water extract organic beans and grains, and package it in aseptic EDENSOY cartons, Eden Foods only uses high quality whole food ingredients, the most intelligent packaging, and the least amount of hydrocarbon energy to do so, including in its distribution and final utilization. The filled carton packages require no refrigeration in storage or transport until they are opened. EDENSOY cartons are 77 percent from certified sustainable forests that ensure biodiversity, protection of endangered species, and are recyclable. The Environmental Protection Agency (EPA) reports that pollution from refrigeration has been increasing exponentially. Aseptic packages reliably deliver much needed ‘no refrigeration needed’ value to its handling and distribution. Making food, poor quality to boot, that requires no refrigeration into one that does, just for a marketing advantage, is widely considered ecologically unethical.

Glass packaging is also used for all EDEN organic Fruit Sauces, Butters, Juices, Sauerkraut, and most Condiments. After proper research, Eden chose glass as the most environmentally and health–friendly of all food packaging materials. Glass is made from three sustainable ingredients – sand, limestone, and soda ash, and it is relatively easy to recycle.

Organic EDEN Teas, 16 tea bags/box, are appropriately packaged. Unbleached Manila fiber bags are simply crimp sealed to avoid glue, with a 100 percent cotton string. Epichlorohydrin (plastic/epoxy resin and known carcinogen), which is common in commercial tea bags, is not present. Each tea bag is wrapped in a moisture–proof paper envelope that is printed with soy ink. 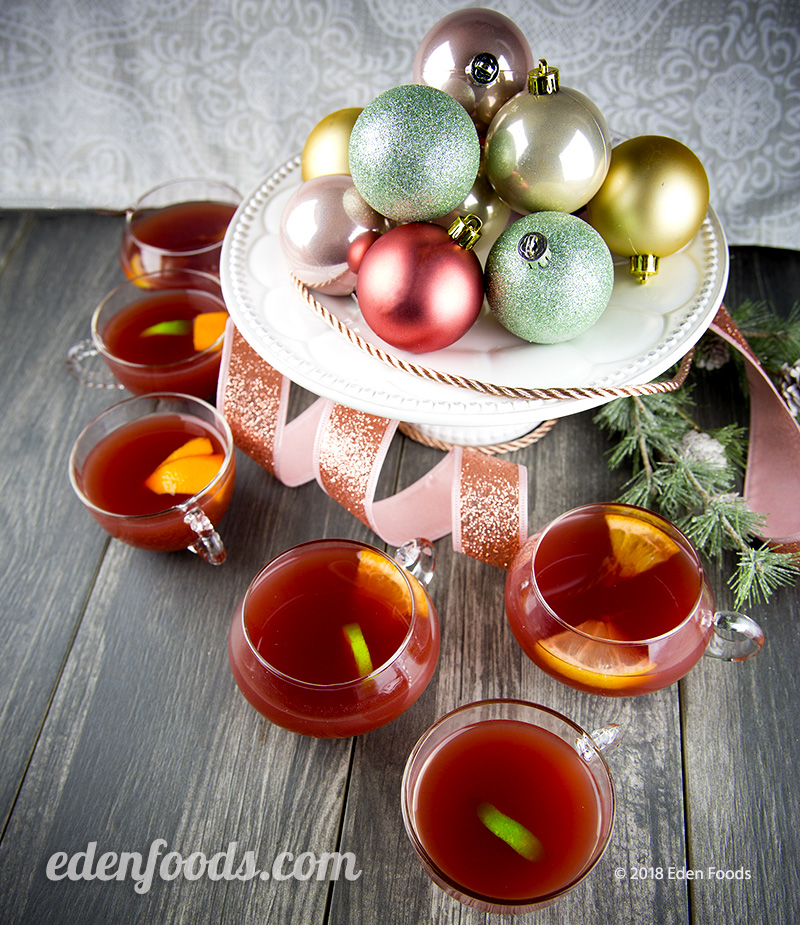