Rice has been the most revered staple of Japan for eons. ‘Gohan,’ the Japanese word for cooked rice, means ‘honorable food.’ There are over 40,000 types of cultivated rice grown around the world, and 90,000 varieties in seed banks.

There is just one type of rice used to make Japan’s most celebratory food, Mochi. It is a sticky, glutinous (but gluten–free) short–grain sweet rice Oryza glutinosa. Cooked, steamed, and pounded, it is made into uniquely chewy, moist, elegant rice cakes that strengthen energy and stamina. Mochi, good for everyone, is thought to be especially useful to nursing mothers.

Mochi has been Japan’s all–occasion happy food for celebrations since about 800 A.D. It is more than food, however. Honorable O–mochi is known to embody inadama, the spirit that dwells within rice. That spirit energy is acclaimed and deeply respected. It is considered to be purifying and uplifting. The Cambridge World History of Food explains, “People thought that the essence — the sacred energy of rice — was made purer by pounding, and mochi was believed to contain the ‘spirit of rice.’ Naturally, mochi was and still is the most celebrated form of rice and therefore the most appropriate food for feasts.” Mochi is always served at New Year’s festivities, births, birthdays, weddings, the arrival of spring, special occasions, and holidays throughout the year. Mochi is also consumed by all throughout the year, during every season. It has long been thought that mochi purifies and rejuvenates one’s fundamental strength.

Today, commercial mochi is simply ground sweet white rice. It is not pounded. White sweet rice flour is also used to make mochi from a dough. It is not mochi if it is not pounded, is Eden Foods’ experience. Whole grain mochi is its traditional form, from wiser, simpler days. Pounding the sweet brown rice is an essential in developing it into the delicious, easily digestible, renewing food that is mochi.

Organic EDEN Mochi is thoroughly authentic, made by the Kojima family. They began making brown rice mochi in 1974 when only white rice mochi remained available. Mr. Kojima has ingeniously translated traditional farmhouse methods into a small–scale, certified organic production system. It is a privilege to access this pounded whole grain mochi, and Eden Foods is honored to be able to share it. Traditional wisdom in the old way of pounding mochi deserves happy, celebratory appreciation.

Stricter and more diligent than the USDA, Japan Agricultural Standard (JAS) certified organic sweet brown rice is washed, soaked overnight, cooked, and steamed. The rice is then ready for pounding. A pounding machine mechanically lifts a large granite pestle (the pounder) that is repeatedly gravity dropped onto the hot steamed rice. After each drop, the rice is deftly hand–turned preparing it for the next drop. Individual grains of sweet brown rice are pounded into one single mass of thick, sticky dough called mochi. After pounding, this warm soft mochi is spread into half–inch thick sheets to shape it before it is rested and allowed to harden in a cooler. Three days later, the sheets of hardened mochi are cut into small cakes and steam–vacuum packed for a two–year shelf life. No refrigeration in transport or storage is needed until after it is opened.

The three varieties of EDEN Mochi — Sweet Brown Rice, Sprouted Brown Rice, and Brown Rice & Black Soybean Mochi — are 100 percent whole grain. EDEN Mochi is versatile, quick cooking, and easy to make. It is great as breakfast, lunch, dinner, or as a satisfying snack. Mochi softens and puffs into moist, chewy cakes with a crisp outer crust from slow pan frying, or when baked at 350° F for 8 to 10 minutes. Pan cook mochi with, or without, unrefined oil, bake, broil, grill, or deep–fry until it puffs. It is great as is, dipped in or drizzled with EDEN Shoyu Soy Sauce, wrapped in EDEN Nori, in miso soup, or stew. Cut and add some pieces of cooked mochi to finished soup or stew as gluten–free dumplings or croutons. Cook quartered pieces on a hot waffle iron, then top with organic EDEN Cherry, Apple, or Grape Butter. Dip cooked mochi in hot maple syrup and then roll it in chopped or ground toasted nuts or seeds for a sweet mochi treat. Visit edenfoods.com for many free recipes. 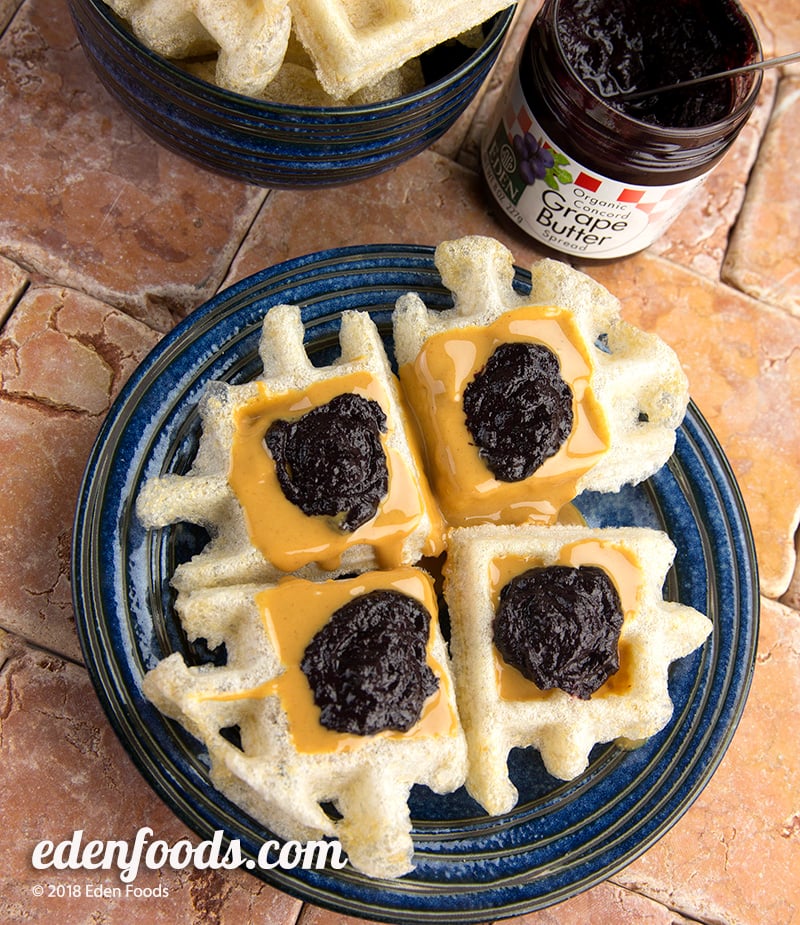