Traditional Japanese foods have gained appreciation as some of the most beneficial in the world. They enable Japan to have the healthiest and oldest senior population. One of its superfoods is the pickled ume plum, or umeboshi. Researchers often refer to the umeboshi as ‘the king of alkaline foods’ for its alkalizing and invigorating qualities. The organic acids of umeboshi help remove lactic and pyruvic acid from our blood that accumulate from taking refined sugar, refined grain, overly processed foods, alcohol, and red meat. Umeboshi plums are valued in Japan and macrobiotic households as an alkalizing digestive aid and metabolic stimulant. Their high citric acid content is a catalyst to the Krebs Citric Acid Cycle by which cells create, store, and release energy. They are believed to help maintain a healthy acid/alkaline balance necessary for optimum health.

Ume plums that become umeboshi are from the fruit tree Prunus mume, which is related to both the plum and apricot. While more closely related to an apricot, the ume fruit is commonly referred to in English as the Japanese plum. These plums are used to prepare traditional home remedies and supplements such as EDEN Ume Concentrate (bainiku ekisu) and EDEN Ume Plum Balls, fruit juice, plum sauce, as a flavoring for confections and liquor, and in making pickled plums like EDEN Umeboshi. The trees, as well as their blossoms and fruit, are highly prized in Japanese culture and mythology.

Ume plum trees originated in China more than 2,000 years ago and were introduced to Japan about 1,600 years ago. The first written reference to the Japanese specialty, umeboshi, is found recorded in the 10th century. Umeboshi plums were a staple in the diet of the samurai, helping them to maintain stamina and alertness.

EDEN Umeboshi Plums are made the ancient and traditional way that has been consistent for 2,000 years. They contain nothing untoward.

Common today are commercial, imitation umeboshi that contain synthetic dye, chemical flavorings and additives. It is best to avoid them altogether.

EDEN Umeboshi Plums are made from the ‘Nanko’ variety of ume plum that is prized for soft, thick, juicy pulp, delicious flavor, and a high concentration of citric and organic acids. Nanko ume plums are from Wakayama prefecture, an area known throughout Japan for its superior quality ume plums and pickled umeboshi.

Plums are harvested in late May to early June while they are still green and most acidic. They are washed and soaked overnight to remove bitterness, before being placed in large kegs with layers of sea salt. The salt draws juice from the plums. To keep them covered in brine, a wooden lid is placed on top and heavy stones are placed upon it. The combination of salt and pressure draws out the juice, creating the brine called ume su. The plums are kept in brine, in the dark, at ambient temperatures for about a month. Slow lactic acid fermentation develops under these conditions. This inhibits development of undesirable microorganisms and enzymes. The plums are then removed, placed on wooden racks or bamboo mats, and allowed to dry in the sun for four to seven days. Each night during this drying process, the plums are returned to the pickling brine. The cycle is repeated daily.

At this stage, red shiso leaves Perilla frutescens of the mint family, also called ‘beefsteak’ leaves, are placed in the brine to enhance flavor and impart a brilliant pink to red color, depending on how much shiso is added. Besides adding color to the brine, red shiso leaf contains the organic compound perilla aldehyde, which is a very potent stabilizer and adds nice flavor. It also contributes to strengthening digestive health.

The sun–dried plums are placed in the red brine to soak and mellow. The plum's color changes from green to pink or deep red. In four to five days, the plums are removed from the red brine and placed in kegs where they are allowed to naturally age for a year or more. It is said that an umeboshi aged five years has had its entire citric acid content moved from the flesh of the plum into its pit and back again. Due to the aging process, it is transformed and energized. The tangy, red liquid is ume su and is sold as EDEN Ume Vinegar. EDEN Umeboshi Paste is puréed pickled plum pulp for use as a spreadable paste.

Their tart, sour flavor make EDEN Umeboshi Plums and EDEN Umeboshi Paste excellent accompaniments to grain and vegetables. They impart delicious flavor to sauces, salad dressings, dips, and vegetable dishes. They are also great in sushi, quick nori rolls, and rice balls. For an amazing treat, rub some on hot corn on the cob in place of butter.

EDEN Ume Vinegar is used like any other vinegar in making salad dressings, vinaigrettes, sauces, and homemade pickles. Unlike true vinegar, ume vinegar is very salty. When substituting with it, reduce the sodium called for in recipes. The tangy red shiso leaves that give color to umeboshi plums, umeboshi paste, and vinegar are removed from the brine and become EDEN Shiso Leaf Powder after sun drying and grinding. The ground pickled shiso leaf is a valuable and tasty condiment on grains, salads, noodles, fish, potatoes, popcorn, and many other dishes.

All EDEN Ume Plum items are Gluten free and 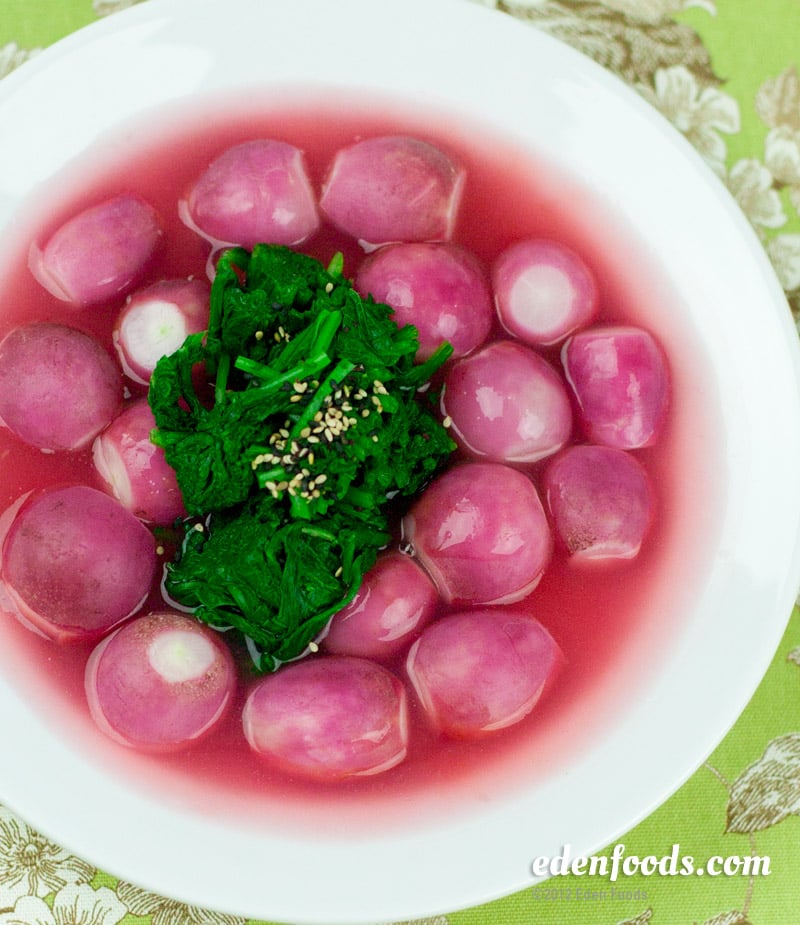