Whole grain is the inviolable human nourishment necessity. Everything else moves into place and takes care of itself when it is central in one's diet. Exercising free will to bring it into your routine is paramount. It requires effort and lifestyle change, but results are more than worth it. Rejuvenation and intuition will demonstrate progress.

The Shift Away from Wholeness

Around 1870, millstones used to mill grain into flour were replaced with metal rollers. Commercial flour mills across Europe and America converted to the new roller mill flour method over a short span of about ten years. A series of rollers gradually crush the grain into flour much faster than millstone grinding.

The roller mill method became universal in large-scale commercial flour production. This made it easy to efficiently create desired flour particle shapes and sizes, and to separate and isolate specific components of the grain. Simultaneously, longer distribution channels and the centralization of milling required longer shelf life for flour. Roller mill white flour was the answer to this, and it provided an economic boon to the mills in selling the bran and germ as animal feed and for oil production. These developments made it impossible for a traditional flour miller to compete with the consolidated, huge capacity, monopolistic roller mill flour industry.

The stone mill method of making white flour entails sifting the bran and germ out of the flour by passing it through cloth of specific weaves. This produces fine flour that contains very little bran and germ, but still contains the grain's germ oil that was released during stone grinding. The oil from the germ gives flour an off-white color and it begins to oxidize and impart a rancid taste soon after milling. Shelf life is therefore relatively short compared to what long distribution channels demand and roller mill production could easily deliver.

Passing grain through rollers moving at different speeds sees the slower roller holding the grain while the faster one scrapes off the germ and bran before the grain is ground into flour. This creates white flour made solely of the endosperm that is mostly carbohydrate with a varying percentage of protein. Roller mills quickly and efficiently remove the very nutritious germ and bran from the grain, but they also remove other components necessary for humans to digest the white endosperm - nourishing components including fatty acids, vitamins, minerals, phytonutrients, polyphenols, and antioxidants.

The lack of understanding about what is necessary in a healthy diet allowed the mills to produce flour with vital, essential nourishment removed. Appropriately, with a growing understanding, we are seeing a return to whole grain flours. Whole grain pastas are part of that at the Eden Organic Pasta Company.

In the early 1970s Eden Foods wanted to make whole grain consumption more appealing and easier. They investigated whole grain pasta. This led to a partnership with the Schmidt Noodle Company of Detroit in making pastas from organic flours that Eden Foods would mill and provide. That Detroit pasta company had been making pasta for local communities since 1923.

The relationship led to organic EDEN whole grain pasta being available to Midwest natural food stores and co-ops beginning in the mid '70s. Eventually Eden Foods had to purchase this pasta factory in 1982, and renamed it the Eden Organic Pasta Company (EOPC). In 1989, EOPC became North America's first third-party certified organic food processing facility of any kind. Eventually all of the flour being used there became 100 percent organic flour.

Whole grain and pastas made from them cause our bodies to burn up to 25 percent more calories per day than do commercial, refined flour pastas. They are more slowly metabolized and reduce stress significantly in their delivery of long-lasting satisfaction. Whole grain pastas are spectacularly appropriate nourishment, very versatile, and suitable for every season.

Eden Foods offers 16 flavors and shapes, 12 of them smooth whole grain. This helps make it easier to enjoy quick, versatile, satisfying, and delicious good food. There is spaghetti, fork-friendly twists and spirals, fun and pleasing alphabets; many options that can be ready in just a few minutes. Variety is essential value — so try or gift an EDEN Pasta Tote or Gluten Free Whole Grain Tote.

With no salt added, no oil, eggs, or untoward additives whatsoever, EDEN pasta is 100 percent organic and they are Non-GMO verified. Whole grain is freedom - free recipes and more information can be found at edenfoods.com. 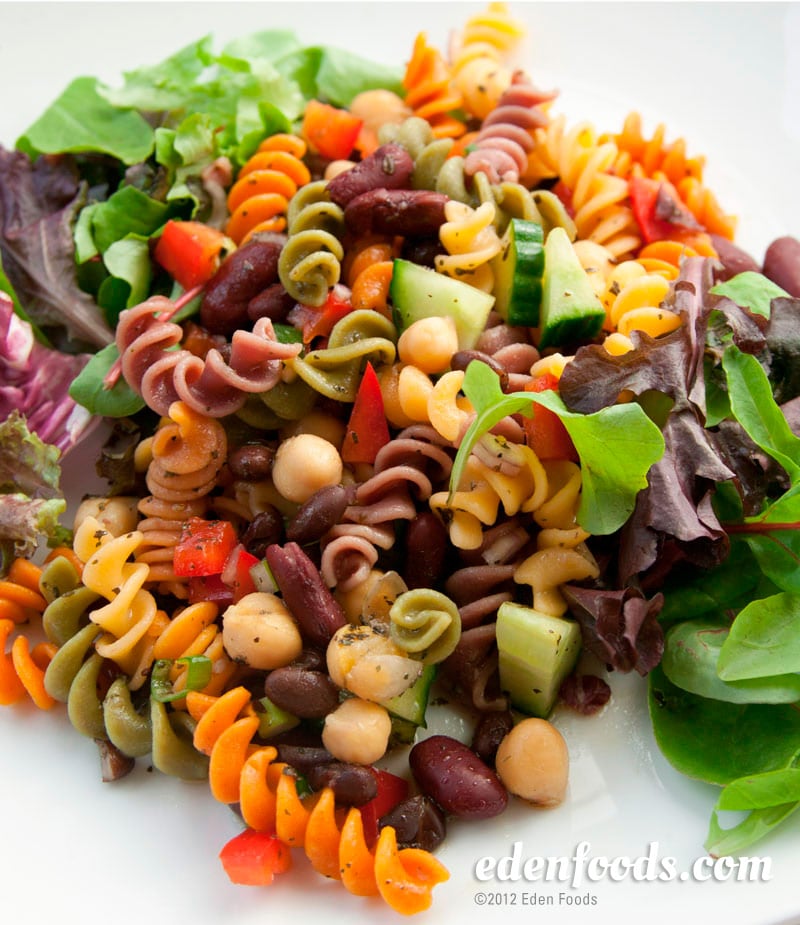