For over 6,000 years quinoa (KEEN–wah) has served as a staple and cultural centerpiece in South America's Andean region. Its name is from the Greek words chen (goose) and pous (foot), because its leaves resemble a webbed goose foot. In the traditional Quechua language, this phrase translated to ‘kinwa.’

Ancient Incans revered quinoa as a sacred crop, calling it chipaya mama ‘mother of all grains.’ During the planting ceremony the Incan emperor planted the first seed using a golden shovel.

Today, quinoa is being rediscovered as the rice of the new millennium for its easy cultivation, simple cooking, and exceptional nutritional profile. NASA is considering quinoa for the Controlled Ecological Life Support System for long space flights. From ancient cultures to outer space, quinoa has earned its status as a food fit for royalty, and for our children.

Quinoa seeds range from ivory to pink, brown, red, or black, depending on the variety. New EDEN Organic Red Quinoa is the rare heirloom pasankalla variety. Historically red quinoa from the intersalar region was reserved for royalty and high priests. This region surrounds the ancient Uyuni Salt Flats where rich soil and arid climate create robust, large seeds. The conquistadors outlawed quinoa cultivation in trying to control these native peoples.

Red quinoa has a sweeter, nuttier flavor and more texture than white quinoa. It is grown at over 12,000 feet in the Andean Plateau of Bolivia where it is isolated and protected from hybrids and genetically engineered varieties. Families tend to their plots using age–old techniques. They shun agricultural chemicals. They respect nature's yearly variations and plant the seeds when cacti begin to bloom in September or October. Quinoa is hand harvested the following April.

EDEN Organic Red Quinoa is cleaned and double washed in pure mountain water. Rubbing and washing removes saponins, the bitter seed coating that protects quinoa from being eaten by birds and insects. The quinoa is solar air dried, bagged, and transported to Eden in Michigan. Here it is packed in protective, resealable pouches in our AIB International ‘Superior’ rated facility.

EDEN Organic Red Quinoa is grown sustainably in ways that help preserve native customs and culture. Today it is this culture's gift to us spanning thousands of years, nutritious, flavorful, convenient, and versatile.

Red quinoa is 100% whole grain and free of wheat and gluten. It is an excellent source of dietary fiber with 20% daily value (DV). Quinoa is high in lysine and threonine, both rare in grain, providing a balance of all amino acids including the eight essential amino acids.

Quinoa is served in place of rice or any whole grain, cooking in less than 15 minutes. Try it in soups, stews, and salads, or with beans or vegetables. Roast the seeds in a skillet for added flavor. Enjoy them as cereal or an entrée, or sprouted for superior nutrition from natural enzymes and vitamins. It is easy to add to baked goods by blender grinding quinoa seeds into flour. Just in time for the holidays, new EDEN Organic Red Quinoa adds vibrant color to festive dishes. Free recipes for Scarlet Quinoa Salad, Minted Quinoa with Crunchy Pine Nuts, and Baked Squash Stuffed with Quince and Dried Fruit are available at http://www.edenfoods.com/recipes. 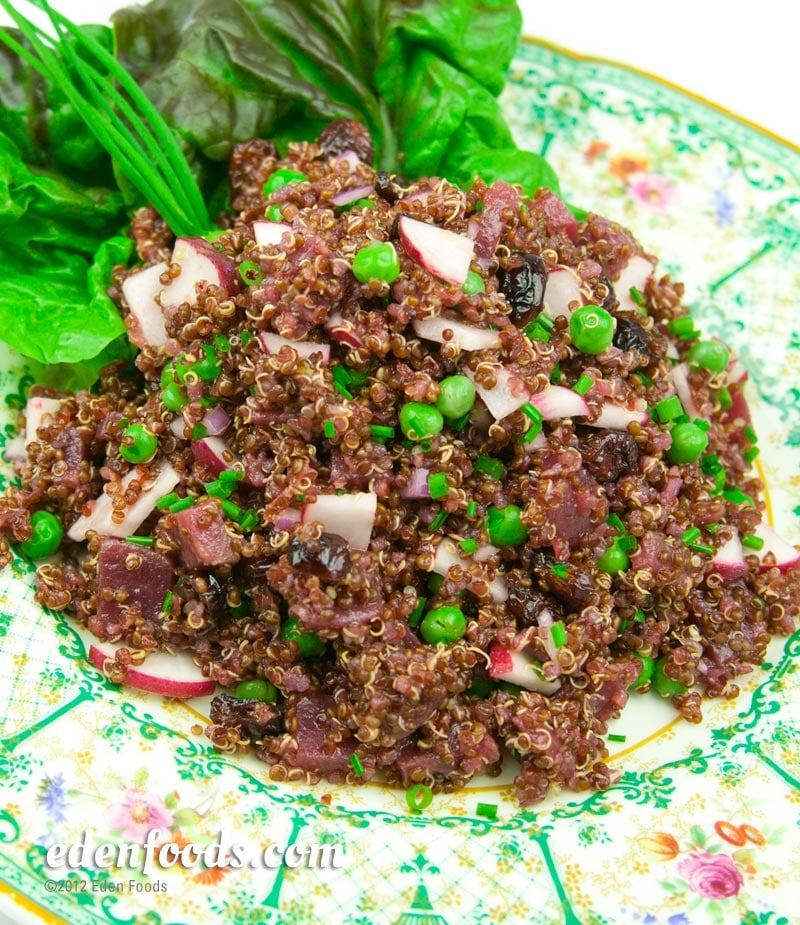