Best of All Grains

The twelfth century healer St. Hildegard von Bingen wrote, “Spelt is the best of grains. It is rich and nourishing and milder than other grains. It produces a strong body and healthy blood for those who eat it and it makes the spirit of man light and cheerful.” Numerous studies in Europe have confirmed what St. Hildegard believed, spelt is easier to digest than common wheat.

Known as a gentle grain, spelt is allergy friendly. Although it does contain gluten, it is very different from modern wheat's. Its highly water-soluble protein structure makes it easy to digest and can often be enjoyed by those sensitive to modern wheat. Exceptional 100% whole grain Eden Spelt Pasta with its impressive nutritional profile, superb flavor, and smooth texture, nourishes and satisfies.

Spelt Triticum spelta is an ancient emmer wheat variety and distant relative of modern hybrid wheat. It was first grown about 9,000 years ago in the Fertile Crescent of the Middle East and northern Greece. In Italy it is known as farro grande, farricello, Zea, and siligo. In Germany it is known as dinkle. Spelt was the staple grain and bread wheat of Europe and the Middle East until it was displaced by contemporary wheat. It remains a significant food crop especially in Germany, Italy, Switzerland, Austria, and the Ardens region of Belgium.

Swiss immigrants are credited with bringing Spelt to eastern Ohio in the 1890s. Being less amenable to modern farming methods, it fell into disuse until being revived by U.S.A. organic farmers in the 1980s. Spelt has a strong hull that stubbornly clings to the grain and is difficult to clean with regular thrashing machines. The hull, however, is a great asset protecting the grain from insects and pollutants, while helping retain nutrients, moisture, and freshness during storage. Spelt requires very little nitrogen in the soil to grow well and naturally tends to choke out weeds, making it an ideal crop in organic agriculture.

Whole grain is key to a healthy diet providing a broad range of nutrients in the exact proportions needed for good health and well-being. Whole grain has three main components: bran, germ, and endosperm – all are valuable sources of nutrients that are greatly reduced or lacking in refined grain. 100% whole grain Eden Spelt Pastas are made from the entire grain, not reassembled components. The four varieties are: • Spelt Spaghetti • Spelt Ribbons • Spelt Ziti Rigati, and • Spelt & Buckwheat Gemelli – a blend of 70% organic spelt and 30% organic buckwheat. They provide fiber, protein, iron, thiamin B1, niacin B3, magnesium, and zinc. They are very low sodium foods with no salt added.

Every action in making Eden pasta is designed to create the finest flavor and texture. Small batch, freshly milled U.S.A. family organic whole grain, purified water, artisan craftsmanship, and slow steam/air-drying are used. It is made at the Eden Organic Pasta Company, a Detroit landmark using traditional pasta making techniques and vintage Italian equipment daily since 1923. It was North America's first third-party certified organic food processing facility. All of the packages are reclosable, recycled and recyclable paperboard boxes, with a tasty recipe and photo from Eden's kitchen printed on the back. 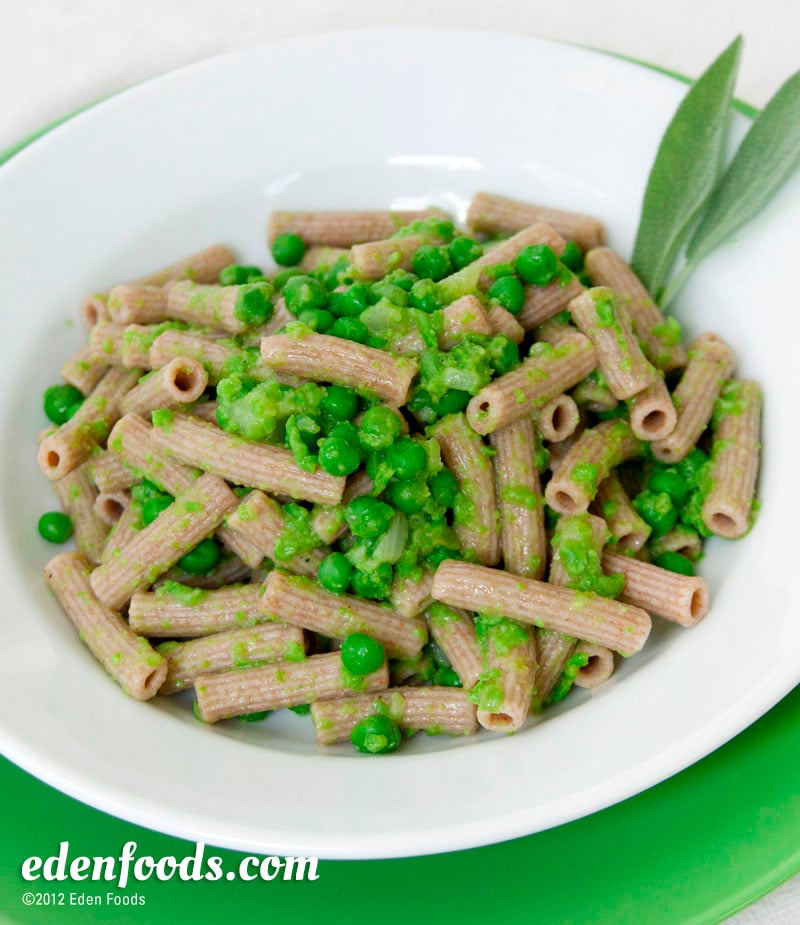