The most traditional and popular New Year's activity in Japan is the making of mochi. Families and folks gather to make it, sharing especially in the pounding of mochi. Mochi is glutinous (sticky) sweet rice Oryza glutinosa, cooked and pounded into soft chewy cakes. A celebratory food in Japan for over one thousand years, it is an all-day social event of the New Year's celebration.

A mochi soup cooked with vegetables called Ozoni is the first meal of the New Year. It is deeply believed to be ‘necessary’ for a happy new year.

It has long been thought that mochi purifies one's body and rejuvenates health and physical strength. Folklore holds that it is the best food for improving breast milk and for recovering strength after childbirth. It is said that eating mochi during the summer months encourages production of new organ tissues.

Mochi is served to celebrate births, birthdays, weddings, and other festive occasions. The Cambridge World History of Food says this about mochi — “People thought that the essence — the sacred power of rice — was made purer by pounding, and mochi was believed to contain the ‘spirit of rice.’ Naturally this was and is the most celebrated form of rice, and therefore the most appropriate food for feasts.”

Customarily, mochi is made from cooked sweet brown rice and is hand-pounded in a wood or stone mortar with a wooden mallet. This requires significant physical exertion for more than hour while the rice is still hot and it is shared among those who have gathered to participate. Today's commercial mochi is simply made by grinding cooked, refined white sweet rice; but Eden Foods says, “It's not mochi if it's not pounded.” We value the whole grain, sweet brown rice versions. The pounding of mochi is thought to be a key factor in creating its taste, digestibility, and rejuvenating energy.

DEN Mochi is authentic mochi made by the Kojima family of central Japan. They began making brown rice mochi in 1974 when only white rice mochi was available. Mr. Kojima has ingeniously translated traditional ‘farm house’ methods into a small-scale, Japanese certified organic, production system. The pounded whole grain mochi they produce is a privilege to have access to, and we are proud to share it.

JAS certified organic sweet brown rice is washed, soaked overnight, and steamed with reverse osmosis purified water. After steaming the rice is prepared for pounding. A pounding machine mechanically lifts a heavy granite stone pounder that is repeatedly gravity dropped onto the hot steamed rice. After each drop the rice is deftly hand turned, preparing it for the next drop. The whole grains of sweet brown rice are transformed into a single mass of sticky dough called mochi.

After pounding, this warm soft mochi is spread into half-inch thick sheets in boxes to shape it before it is rested and hardened in a refrigerated cooler. Several days later the sheets of hardened mochi are cut into smaller ‘cakes’ and steam-vacuum packed for a two year shelf life, with no refrigeration needed for storage or transport.

All three varieties: Sweet Brown Rice Mochi, Sprouted Brown Rice Mochi, and Brown Rice & Mugwort Mochi are 100% whole grain. DEN Mochi is versatile food that can be served at breakfast, lunch, or dinner, and as a tasty snack. Mochi softens and puffs into moist, chewy cakes with a crisp outer crust from slow pan sizzling or when baked about 8 to 10 minutes. Pan cook mochi with or without oil, bake, broil, grill, or deep-fry until it puffs. It is great as is, with DEN shoyu, wrapped in DEN Nori, in miso soup, or made into waffles topped with DEN tart cherry, apple, or grape butter. Add cooked mochi to soup or stews after cooking for dumplings. Visit edenfoods.com for many free recipes.

DEN Mochi is cooked, pounded whole grain sweet brown rice. It has no salt added, is rich in manganese, a good source of magnesium and complex carbohyrates. It is high-energy food, and Gluten Free. 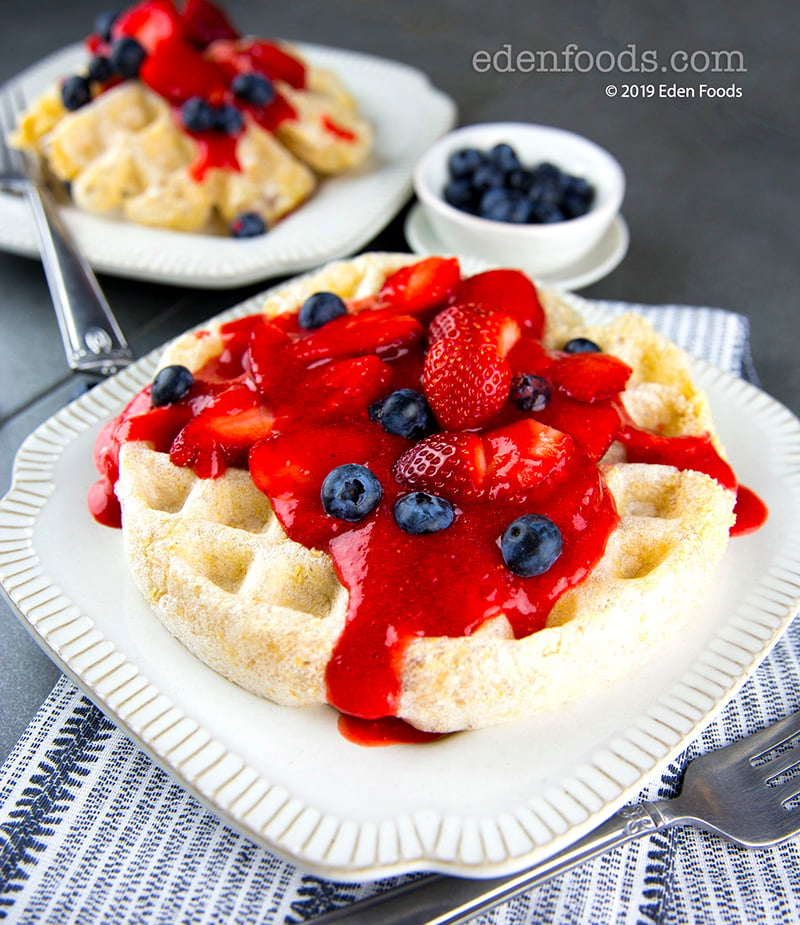