When you think of Detroit manufacturing, pasta is not what comes to mind, but The Eden Organic Pasta Company (EOPC) has been making pasta daily in the heart of Detroit since 1923. Formerly the Schmidt Noodle Company, Mr. Schmidt and his noodle company had specialized in serving the large local Polish community providing them with Kluski Egg Noodles and other Polish traditional pasta.

1993 - After converting 100% of the pasta factory's production to ‘organic,’ it was fondly renamed the Eden Organic Pasta Company.

Leading to these later developments, Eden Foods was challenged by trying to make organically grown whole grain more user friendly for people. This pursuit began in the late 1960s as Eden learned that the surest way to recover or brace good health was to add significant amounts of pure whole grain into one's diet. The idea of making organic whole grain pasta seemed logical. A local search began for a pasta manufacturer that would make pasta with whole grain flour that Eden Foods would provide to them. A relationship gradually formed between Eden and the Schmidt Noodle Company of Detroit. The first pasta that resulted was whole grain organic spaghetti. After considerable experimentation that included learning how to make whole grain flour that would make nice pasta, a delicious and uber satisfying 100% whole grain spaghetti was realized. Packaging was developed and EDEN brand pasta was introduced to the natural foods market in the Midwest in the early 1970s.

For the past 92 years Schmidt Noodle's small batch hands-on methods, original Italian equipment, artisan brass dies, noodle rollers, macaroni dryers, and traditional know-how have continued. Since 1982 Eden Foods has maintained the simple beauty of these traditions. Remarkably caring people working at this small pasta factory have carried it forward. They dutifully look after handling and processing techniques that are long-gone from today's commercial pasta making. Knowledgeable visitors to EOPC still consider this pasta hand-made even though there are traditional machines utilized. We sometimes say EOPC is a functioning museum. It is listed as a sustainable green company on the Detroit Green Map. Over the past few years we have completely taken this old factory apart and put it back together in a manner that should serve its needs for another 90 years.

Each step in making EDEN pasta is designed to create the finest texture and flavor, which also requires the finest Eden selected organic grains. All whole grain flour for this pasta factory is milled at Eden's Michigan headquarters, while semolina and patent durum flour are prepared at a certified organic mill in North Dakota.

At EOPC flour is kneaded with purified water to develop a dough. For noodles, or ribbons as we call them, the dough is rolled out into sheets that are repeatedly folded over onto themselves eight times, and rolled out again. This sheeting, coupled with superb grain, helps develop a valued firm character. The roll-laminated sheets are finished to different thicknesses and cut to various widths and lengths for specific noodle types.

In making macaroni pastas such as spirals and spaghetti the dough is pressed through vintage brass dies and then cut to length. Both the ribbons and macaroni are air-dried on screen trays, while long uncut spaghetti is hung to dry, then cut to length. The pasta is moved to a finishing drier for sixteen to forty-eight hours, weighed, boxed, and prepared for shipping.

With twenty-four varieties and twelve shapes in two different whole grain conditions - nineteen of them smooth, delicious 100% or 60% whole grain - healthy options are at hand, are easy and quick, and certain to nourish and deeply satisfy. The most direct way to recover or brace good health is to add significant amounts of pure whole grain into your diet.

EDEN pasta comes in recloseable, recycled, and recyclable boxes. Each has an Eden's kitchen recipe on the back, with a photo of it prepared. The colors of the box show the percentage of whole grain, Yellow is 100% whole grain, Blue is 60% whole grain, and Green is a sifted durum wheat flour. They are 100% EDEN organic, verified Non-GMO, and free of added salt.

All pasta needs to be cooked ‘al dente’ or slightly undercooked - firm to the bite. It is then not only more pleasurable to eat, it has a lower glycemic index. Cooking times for pastas that are to be cooked twice or 'al forno,' need further shortening in the first round of cooking. 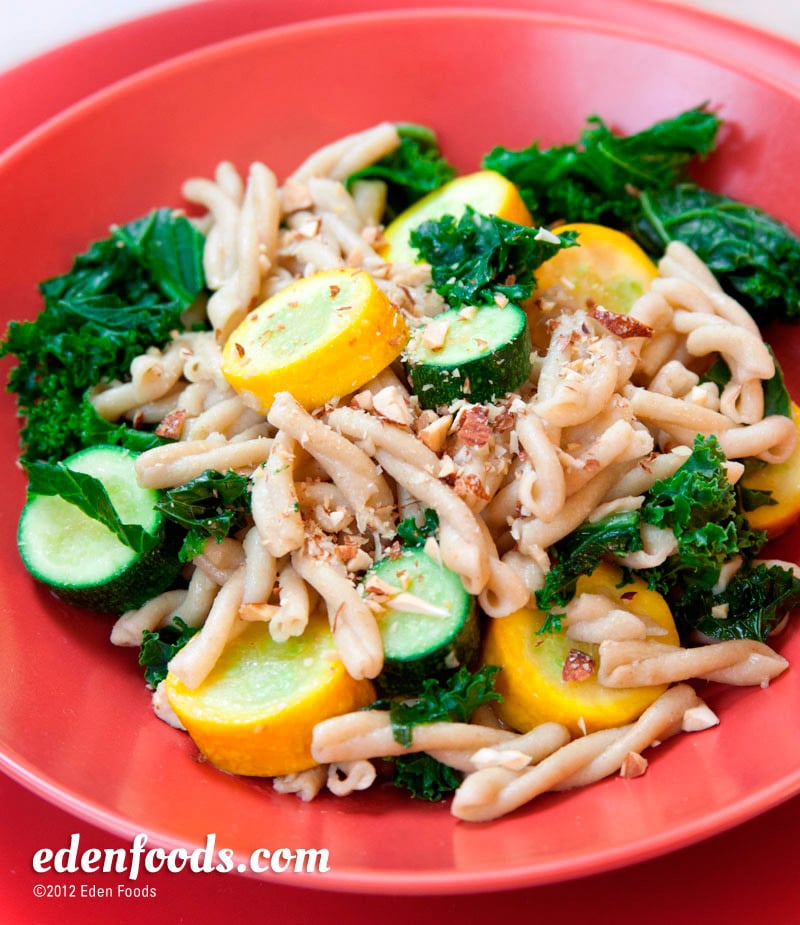