Rice for Riches, Peas for Peace

Beans and legumes are associated with coins, money, and good fortune. Green lentils with their coin shape are thought to bring those who eat them good luck. In Italy, Hungary, and Brazil a New Year lentil stew is traditional, stemming from a strong belief in this.

Black Eyed Peas are referred to in the old saying ‘Rice for Riches, Peas for Peace’ as a source of good luck to those eating them at the New Year. Black eyed peas are a tradition of the South and an important part of the holidays, most famously in the dish Hoppin' John. This spicy stew of black-eyed peas, leafy greens, and rice is customarily served on New Year's Day. The combined ingredients of Hoppin' John are believed to assure prosperity. The day after New Year's leftover Hoppin' John becomes Skippin' Jenny, a frugal meal taken as a precursor to prosperity in the year to come.

Belief in, and superstitions about, the power of various foods might be explained in part by the word ‘holiday.’ It is from an Old English word for holy day.

New Year's in Japan is not complete without sweet black soybeans to promote health and instill hope in the New Year. The two calligraphy characters used to depict black soybeans mean ‘hardworking’ and ‘robust.’ Japanese shout them out praising the power of black soybeans. The shouts translate, “Work fruitfully and live faithfully.”

EDEN Beans are the finest of the U.S.A. organic crop, from a dedicated network of families and their organically managed land. EDEN Beans come cooked in 15, 29, and 108 ounce, BPA and BPS free cans. Six of them are packed as dry beans in one pound boxes. These include relatively quick cooking green lentils. Organic EDEN Brown Rice & Lentils, Curried Rice & Lentils, and eight other varieties of canned rice & beans are available.

A German tradition is that the more strands of sauerkraut in one's New Year's meal bowl, the greater your prosperity in the new year will be. Eden Foods' sauerkraut offerings will triple this year to include Kimchi Sauerkraut and Three Onion Sauerkraut.

EDEN Sauerkraut is authentic, grown and made by the Swiss, Hirzel family in Ohio since 1923. They grow sweet cabbage and make superb old world sauerkraut. Hand harvested organic cabbage is washed, cored, shredded, and fermented with EDEN Sea Salt for at least six weeks. Generations of experience, traditional methods, and one family's handling from seedling, to field, while it grows, harvest, preparation, and fermentation create its great taste and efficacious character.

Soba noodles impart strength, good health, and longevity in Japan's traditions. They are expected at special events and during the holidays. Long Life Soba toshi-koshi is customarily the last food of the year, taken as midnight brings the New Year. That dish is soba noodles in a kombu shoyu dashi broth. It is taken to ensure being kept strong and healthy through the coming year. Misoka soba is last-day-of-the-month soba and eaten as the last meal of each month to celebrate and bring a month of good fortune.

EDEN Soba noodles are high quality grain, traditionally developed into dough with a bit of sea salt, formed into noodles, slow air dried, and then cut to length. They are expertly crafted, rewarding soba noodles.

The most traditional and popular New Year's activity in Japan is making mochi. It is quite a production. Many people gather to make it and share in the pounding of mochi. It begins with a very sticky glutinous sweet rice Oryza glutinosa (gluten free though). It is cooked and then ceremoniously pounded into a thick, sticky dough. The pounding requires a great deal of energy, so the gathering helps get it done. A celebratory food with well over a thousand year history, it is an all-day social event of the New Year's celebration. New Year's mochi and vegetable miso soup is called Ozoni, the first meal of the New Year. It is deeply believed to be ‘necessary’ for a Happy New Year.

Commercial mochi is made by grinding cooked white sweet rice, or by forming dough from white sweet rice flour. Eden Foods appreciates traditional wisdom in the old way, and that it is not mochi, if it is not pounded.

Organic EDEN Mochi • Sweet Brown Rice • Sprouted Brown Rice, and • Brown Rice & Black Soybean Mochi are real mochi pounded by the Kojima family in central Japan. They reintroduced brown rice mochi in 1974 when only white rice mochi was being made. They bring traditional farm-house methods to their small, certified organic mochi making company. We consider access to this pounded whole grain mochi an honor and privilege. It is a joy to share this marvelous, versatile, and strengthening food. EDEN Mochi is authentic traditional mochi.

For a more joyous life, acquire pure basic foods that will encourage peace, harmony, prosperity, wealth, and good fortune for you and yours. 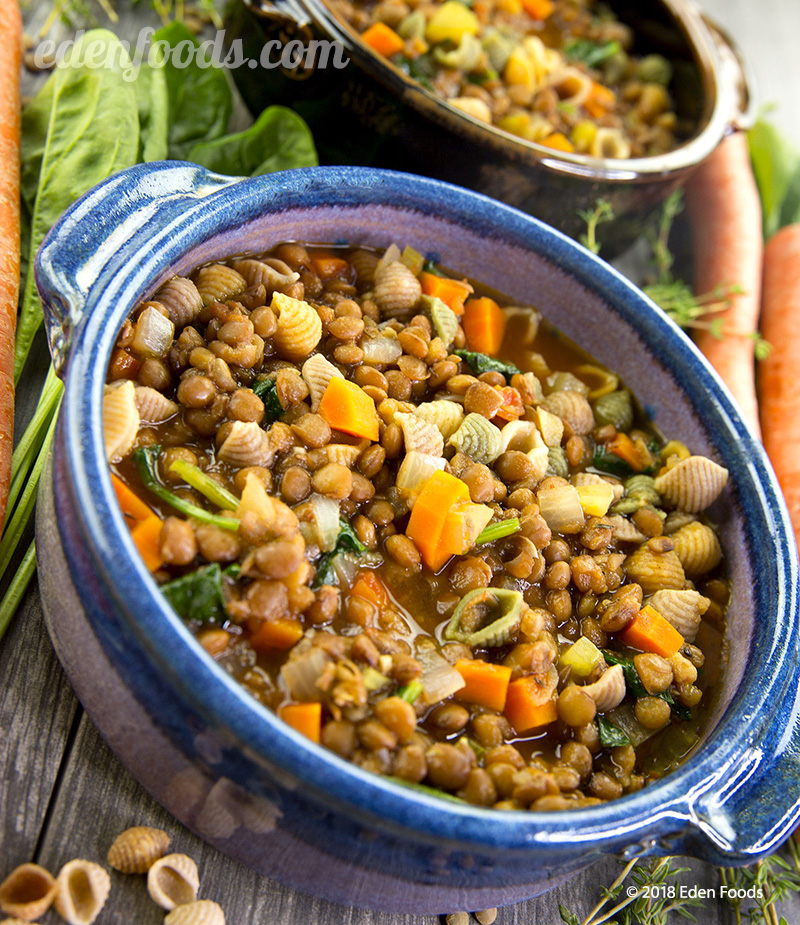